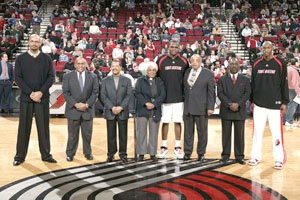 The Trail Blazers honored six Portlanders as part of the team's month-long Black History celebration. The Trail Blazers presented the honorees with a ticket section and a grant for $500 to donate to the charity of their choice. The 2007 roster of Trail Blazers Black History Month honorees includes:
Judge Ancer Lee Haggerty — Judge Haggerty is the first African American to be named Chief Judge of the U.S. District Court for the District of Oregon. Locally, he spent four years in the Metropolitan Public Defenders office in Portland. Before his appointment to the federal bench by President Bill Clinton in 1993, Haggerty was serving as an Oregon Circuit Court judge. Haggerty's grant will go to Zeta Phi Beta.
Gregory Gudger — With 30 years experience in human and civil rights, Gudger has spent time working for the city of Portland's Street Crime Prevention unit, Metropolitan Human Relations Commission and the Affirmative Action Investigator/Employment Program. He currently serves as sole practitioner of civil and criminal litigation. Gudger's grant will go to B.I.K.E., Inc.
The Reverend Alcena Elaine Caldwell Boozer — Rev. Boozer has been an active community advocate for more than 40 years. Educated in Portland Public Schools, she went on to study at Portland State University, Oregon State University, the Church Divinity School of the Pacific and the Episcopal Seminary in Berkeley, Calif. As an ordained priest in the Episcopal Church, Rev. Boozer is currently the rector of St. Philip the Deacon Episcopal Parish in Northeast Portland and an active volunteer in her community. Rev. Boozer's grant will go to the Ecumenical Ministries of Oregon, and her ticket section has been donated to St. Philip's Episcopal Church.
Garfield de Bardelaben — de Bardelaben was the first African-American licensed to practice psychology in Oregon.  After receiving his license in 1981, de Bardelaben went on to become the first Black president of the Oregon Psychological Association. A current resident of Portland, de Bardelaben has served on numerous boards, commissions and as an advisor to numerous organizations. His grant will go to Cancer Care Resources. His ticket section has been donated to the Portland Opportunities Industrialization Center.
Kenneth W. Berry — Berry is a teacher, mentor, arts advocate and choir director among many other things. Currently a middle school teacher, Berry has worked in public education for 36 years. Berry retired as an elementary school principal in 2003 and devotes much of his time to "Keep Living the Dream", an annual tribute to Dr. Martin Luther King, Jr. His annual tribute has grown to be one of the largest of its kind in the United States. Berry has served on many boards and received numerous awards for his work. His grant will go to World Arts Foundation. His ticket section has been donated to the Ockley Green Middle School.
Antonio Harvey — Harvey is most commonly recognized as the former player for the Portland Trail Blazers who now serves as the color commentator for the team's radiobroadcasts. His Harvey Family Foundation hosted a tour of hope for Mississippi's Katrina-ravaged Gulf Coast, featuring assemblies at five high schools, building two playgrounds and hosting a community celebration. The foundation also hosted the Moss Point Tigers from Moss Point, Miss., to play in Portland's King Classic Tournament. Harvey's grant will go to the Harvey Family Foundation, and his ticket section has been donated to New Columbia Village.