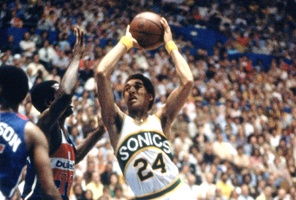 AUSTIN, Texas — Dennis Johnson, former player for the Seattle SuperSonics and the Boston Celtics died Thursday, Feb. 22, after collapsing at the end of his developmental team's practice. He was 52.
Johnson, coach of the Austin Toros, was unconscious and in cardiac arrest when paramedics arrived at Austin Convention Center. Paramedics tried to resuscitate him for 23 minutes before he was taken to a hospital and pronounced dead.
"He was one of the most underrated players in the history of the game, in my opinion, and one of the greatest Celtic acquisitions of all time," said former Boston teammate Danny Ainge, now the Celtics' executive director of basketball operations.
Johnson, a five-time All-Star and one of the top defensive guards, was part of the last Boston dynasty. He spent 14 seasons in the league and retired after the 1989-90 season. He played on title teams with the Celtics in 1984 and 1986 and with the Seattle SuperSonics in 1979, when he was the NBA finals MVP.
Johnson had a reputation for delivering in big games.
"I hate to lose," he once said. "I accept it when it comes, but I still hate it. That's the way I am."
He averaged 14.1 points and 5.0 assists for his career. When he retired, he was the 11th player in NBA history to total 15,000 points and 5,000 assists. Johnson made one all-NBA first team and one second team. Six times he made the all-defensive first team, including five consecutive seasons (1979-83).
"As far as a person, he was a great competitor," Sonics teammate Jack Sikma said. "He wouldn't let things pass. He would cause some friction if he felt strongly about something, but with our team that was a good thing."
Johnson was born Sept. 18, 1954, in Compton, Calif. He played at Pepperdine and was drafted by Seattle in 1976. Johnson was traded to Phoenix in 1980 and Boston in 1983.
He is survived by his wife, Donna; sons Dwayne and Daniel; and a daughter, Denise.
- The Associated Press