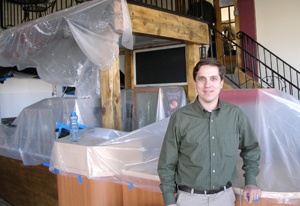 The boarded-up, single pane, leaky windows at the Ethos Music Center are now a thing of the past, says Director Charles Lewis.
The nonprofit music education center, at the corner of Killingsworth Street and Williams Avenue, is in the midst of a cosmetic remodel after receiving a $20,000 storefront improvement grant from the Portland Development Commission.
More extensive renovations also are in store for Ethos now that the group's sale of the old Masonic Temple, two blocks away from Ethos at 5308 N. Commercial Ave., has gone through.
The organization sold the building to McMenamins last month and will use the proceeds from the sale to renovate their own headquarters and set up an endowment fund.
Ethos bought the Masonic Temple for $320,000 from Portland Public Schools several years ago and intended to renovate the once-regal brick structure, which has been boarded up and attracting graffiti since 1981, but when the renovations became too costly, Ethos needed to unload the property. McMenamins bought the building in February for $675,000, and may use the historic North Portland building as an events center combined with office space. Once the remodel is completed, the McMenamins brothers have offered to let Ethos use the building for community events.
"It was a good investment for us," Lewis said, adding that Ethos will put most of the profit from the Masonic Lodge into an endowment fund to ensure long-term financial stability.
Lewis said that the corner portion of the Killingsworth center will have new energy-efficient windows from Canyon Glass; doors and bathrooms that comply with the Americans with Disabilities Act; new tile and carpet; and, most importantly, the Ethos Café.
The café, which will be open to the public at the beginning of April, will act as a year-round fund-raiser for the center and as a waiting area for parents. During the summer, the café also will be a lunch site for students who qualify for free or reduced lunches.
"It will increase our capacity dramatically," Lewis said of the new café.
Right now, the center "utilizes every space to its fullest," he added.
The upstairs portion of the building — old living quarters for shop owners — has been converted into practice studios and sound rooms. Kitchens, closets, bedrooms — even an old bathroom – have been revamped to create more space. Previous renovations have equipped the recital room with three video cameras and sound equipment for recording and broadcasting to cable access television.
As quickly as Ethos can make the room, students are there to fill the spots, Lewis said. Ethos serves more than 400 students each year.