Obama Reaches Out to Black Press 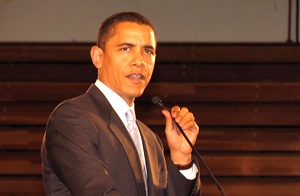 Two days before joining Sen. Hillary Clinton, D-N.Y., and former President Bill Clinton in Selma, Ala. to remember the civil rights marchers killed 42 years ago by riot police on Bloody Sunday, presidential hopeful Sen. Barack Obama, D-Ill., apologized to members of the Black press for not speaking to publishers and editors sooner; but said he is dedicated to winning over African American voters.
"One of the promises of this campaign is to reenergize the African American vote," Obama, 45, said in a conference call with Black press publishers, editors and reporters on Friday, March 2. "I want to let people know that the African American press is critical to this campaign. I haven't had much outreach (to the Black press) over the past month, but we only announced three weeks ago … and we're still getting the kinks out, still trying to get fully organized."
In an interview with National Public Radio last week, Obama said he doesn't feel a need to prove himself to Black leaders, adding, "The notion that right now I'm not dominating the black vote in the polls makes perfect sense because I have only been on the national scene for a certain number of years, and people don't yet know what my track record is."
According to a Washington Post/ABC News poll released this week, many Black voters who formerly favored New York Sen. Hillary Clinton are coming around to Obama. Two months ago, Black voters favored Clinton over Obama, 60 percent to 20 percent. Now those numbers have shifted, with 44 percent of Black voters lending support to Obama and 33 percent to Clinton.
Al Sharpton, a Democratic candidate for president in 2004, told a reporter for the National Newspaper Publishers Association (the Black Press of America), that those numbers are not impressive.
"He's got to get more than 44 percent of the Black vote. He's got to get double that and a lot of White votes to win," Sharpton said. "With the cover of Time Magazine, '60 Minutes,' all of the positive press put together, and he doesn't have 50 percent of the Black vote? That's not good."
During the 25-minute conference call Friday, members of the Black press from New York to Sacramento tried to gauge Obama's opinions on everything from New Orleans to voting fraud.
Asked about his commitment to civil rights enforcement, Obama said he would like to make the federal civil rights division more active.
"We have to keep fighting for some of the hard-won rights that are always in danger … and we have to have significant civil rights enforcement," he said. "We have a civil rights division that has not been attentive to hearing civil rights claims (during the Bush administration), except to punish universities that have engaged in affirmative action."
When one newspaper reporter from the South asked what Obama thought the greatest issue facing Black youth was, the senator said he has been talking to a lot of youth around the country at historically Black colleges, and that the economy seems to be a big concern right now.
"I've been listening to young people on college campuses and one of the things I've heard is that they are concerned about their economic future. They want to know how they'll afford college. Many young people aren't going to college because they either haven't gotten a high school diploma or … they (can't afford it)," Obama said. "The most important thing is to create a career path for them. This has to start with early childhood education."
He added that many young people he's spoken to are also concerned with our country's foreign policy in Africa, the war in Iraq and "Katrina and the injustice that represents."
Talking about the rebuilding of the Gulf Coast, Obama said he is working with Louisiana Gov. Mary Landrieu to ensure that the federal government helps match funds for restoring New Orleans.
"Two or three weeks ago we had hearings (regarding the federal government's ability to match disaster relief funds in Louisiana) and I couldn't believe that they (had agreed to match funds) for Manhattan (after 9/11) and for Florida after Hurricane Andrew, but they weren't going to do that for the single biggest disaster in our history."