By Helen Silvis of The Skanner News
Published: 24 June 2013 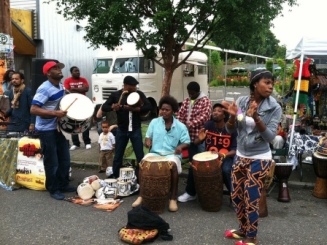 The all-volunteer committee took charge of organizing the street art festival in 2010, after complaints about noise, litter and public drinking threatened to close the event. The group raises funds for portapotties, barricades the street, organizes trash and recycling pickup and staffs the event with street ambassadors. When it's over, the volunteers walk through the street making sure the vendors pack up and the crowds disperse.

This week, on the last Thursday in June, the committee won't be doing any of those things.

"This administration has chosen to ignore our volunteer effort. They've chosen to ignore all our expertise and the experience we've gathered in how to make this event work, and have basically come down with some very unsavory demands, and we will not compromise our position on this.

"Our feeling is we should have been part of the discussion."

"I moved here because of Last Thursday. We have had our double decker bus and had our performers out on the street for the last five years. I help run this cooperative gallery. I am sad. I am frustrated. I am…" her voice trailed off and she put her hand to her heart.

Under the city's proposal, the event permit would require:

2. Increasing the number of portable toilets from 12 to around 80.

4. Reopening the street with mechanical street sweepers that would spray water on streets and sidewalks to deter lingering festival goers
.
Committee members disagree with all four new conditions. Closing the street at 27th would cut out galleries that have been involved with Last Thursday since its beginning, Reeverts said.  The recommended increase in the number of portapotties would dramatically affect the cost of the event. Last month 12 portapotties cost the group $1,500.

Trying to shut down the event at 9 p.m., when it historically has gone to 10 p.m., seems punitive, she says. And planning to clear the street with a street sweeper would run counter to all the work committee volunteers have done to create good relationships among business owners, event attendees and neighbors.

"We think its unreasonable force to add street sweepers that can spray water," said Hilber.

"We already know that this is not how you run this event. This event runs on person to person contact. You can't do it with machinery and loud hailers."


City Argues Rules are Fair
Dana Haynes, Mayor Hale's communications director, said the mayor had asked staffers to look into ways to improve the event as soon as he entered office. And he said the proposals were just that – proposals. Negotiation is possible.

What the mayor wants is for everyone to define success the same way, Haynes said. Success should mean everyone is happy: artists and artisans, business owners, event patrons and neighbors. The city shouldn't have to spend $80,000 to $100,000 to police the event as it has done in the past. In addition, Last Thursday should follow the same rules that apply to other neighborhood events, such as the Hawthorne Street Fair and the Multnomah Village Street Fair, which means having a standard number of volunteers, security personnel and portapotties.

"This time we suggested that if you can't get that number of volunteers and portapotties then maybe we should shrink the event in time and space." 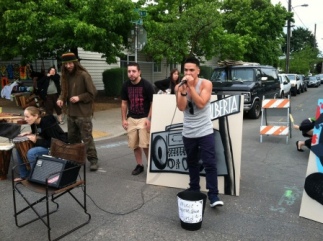 Haynes said no permit has been written yet, because the committee's response was to resign. But he said he's hopeful that a compromise can be found.

"You know what; we have faith in these folks. We believe that Last Thursday is a great thing. It's the same way we feel about the Belmont or the Mississippi fair or the Multnomah Village days. They're terrific. And the volunteers who organize them will make it a great event. We're going to try to help them get there."

However, Last Thursday is not exactly like those other events. It's much larger. The 15-year-old festival attracts between 10,000 to 15,000 people during the summer months it is open. That makes it the second largest event in the city after the Rose Festival, Hilber says, and one that brings significant dollars to Alberta Street merchants, benefiting the entire city.

But the Last Thursday's success has been a thorn in the side of some neighbors. Crowds have lingered in the neighborhood until the early hours, keeping residents awake. Fights have broken out on occasion. And neighbors have also complained about litter and public urination.

Haynes said the mayor has just learned about the committee's decision not to proceed with this week's event, so the City has made no decision about how to proceed.