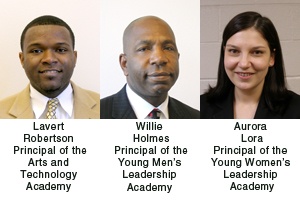 Call it a homecoming for Lavert Robertson. The new leader of the Arts and Technology Academy — one of the four new academies that will soon make up the whole of Jefferson High School – graduated from Jefferson in 1994.
He left Portland for a while – first to a administrator job at an elementary school and then to a position as a high school administrator in Champagne, Ill. — but Robertson says he always kept an eye on his hometown.
Now at the forefront of the most news-making high school in Portland, Robertson says he's used to being thrown into the hot seat.
"You can't make mistakes," he says about being a school administrator. "… Or you might end up in the news."

The difference between then and now

The Portland Public School System announced last week that the four administrator positions for Jefferson High School's new academies had been formally filled. Two of the academies – Arts and Technology, and Science and Technology academies – have been up and running since the fall of 2006. The other two academies – the Young Women's Leadership and Young Men's Leadership academies – will begin in the fall of 2007.
This isn't the first time Jefferson has implemented reforms to boost scores. In 1998, Jefferson created an academy system that included four areas of specialization starting in the 10th grade.
The difference between the 1998 split and today's academies, Robertson says, is community involvement.
"It starts with leadership and communication," he says. "We need to make sure everyone is on board with us. Before, some reforms were created in isolation."
The basic goals of the two active academies are simple: have students focus on a single area of specialization throughout high school while also taking core classes, help them earn college credits through a partnership with Portland Community College, enable them to obtain internships and mentorships with local professionals and push every student onto a track toward college.
The arts academy, with 380 students this school year, offers specialized classes in dance, drama, visual arts, digital media and human resources.
Macarre Traynham, newly named principal of the Science and Technology Academy, says the key to finding success in this current reconfiguration lies within a combination of strategies. Traynham, who has a background in math and was an administrator at Benson High School, says offering a rigorous four-year course study of math and science gives students an advantage when entering college. The program will offer specializations in environmental science, robotic engineering and biotechnology. The types of courses offered will depend in part on what specializations teachers can bring to the classroom. She says the curriculum is an extension of the biotechnology academy structure established in 1998 — a system that was very successful at preparing high school students for careers in the medical fields, according to Traynham. There are 265 students now enrolled in the science academy.

Aurora Lora has a high benchmark to meet. The principal of the Young Women's Leadership Academy plans to send 100 percent of her school's students to college.
This may seem impossible, but the former teacher says she uses the Young Women's Leadership Academy of Harlem as inspiration – that school met Lora's "100 percent to college" benchmark with students whose parents or grandparents had never attended college.
"We have to do whatever it takes," Lora says of getting Jefferson's young girls into college.
As a teacher in an inner-city Houston school with 100 percent of her students receiving free or reduced lunch, Lora says she was able to get every student to pass state testing benchmarks.
The school will allow girls to learn in a more collaborative setting, while focusing on math, science and leadership. Lora said the school is partnering with OMSI to help girls have access to training and internships.
The all-girls academy, eventually serving grades 7-12, is scheduled to open at the beginning of next school year at Tubman Middle School, where Lora serves as principal.
While the start has been slow for the all-boys academy due to low-enrollment numbers, new Principal Willie Holmes says he is confident the 40 applications will grow to about 100. Like the girls academy, the boys academy will focus on college prep, science, math and leadership, along with specialized courses in business management and law.
Holmes, who recently served as an administrator in Dallas, Texas, talks about creating a learning environment that doesn't punish boys for being boys. But how does that translate into an environment in which these boys can learn? Holmes says he is looking into active, not passive, learning strategies to help boys succeed. In addition to core classes, Holmes says the school also will offer leadership classes that emphasize family, community and morals.
Information sessions will be held for the boys' academy from 6 to 7 p.m. Wednesday, March 14 at the Jefferson High School Library and for the girls' academy at 6:30 p.m. Thursday, March 8 and Wednesday, March 14 at Tubman Middle School.