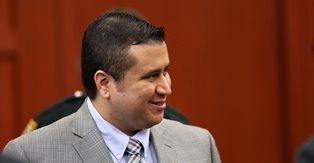 (CNN) -- The prosecution in the George Zimmerman trial in Florida asked 40 potential jurors about a wide range of subjects Wednesday, the eighth day of jury selection.

Zimmerman, a former neighborhood watch captain, is charged with second-degree murder for killing 17-year-old Trayvon Martin in Sanford, Florida, on the night of February 26, 2012. He claims he shot the teenager in self-defense.

Prosecutor Bernie De La Rionda asked the candidates about their families, their careers and even their criminal histories.

There were some moments of levity.

Multiple jurors said they enjoyed drinking beer. The courtroom erupted in laughter when one potential juror said he participated in competitive barbecue contests but has not won any awards yet. Zimmerman smiled and chuckled along.

De la Rionda also asked the potential jurors about their exposure to firearms.

The jurors' attitudes toward guns may be an important factor in how they view Zimmerman's decision to pursue the unarmed Martin with a gun the night of the shooting.

Most of the jurors said they either own a personal firearm or have family or friends who own guns. One candidate said he was a member of the National Rifle Association. Another said he goes to a shooting range every few months. Only a few of potential jurors said they had limited exposure to guns.

The 40 potential jurors will return to court at 9 a.m. ET Thursday for questions from the defense.

After the defense finishes its line of questioning, the process of whittling down the pool to the six jurors and some number of alternates will begin.

Both sides will have the chance to keep or strike jurors. Each side has 10 peremptory strikes -- which means they will have 10 opportunities to eliminate potential jurors without having to disclose their reasons -- and an unlimited number of strikes "for cause," for such reasons as bias or hardships.

The shooting put a national spotlight on Zimmerman's hometown of Sanford and sparked fresh debates about race relations and gun laws in America.

Zimmerman is Hispanic; Martin was African-American.