Depriest Back for 'Ultra-Modern Russian Concerto' 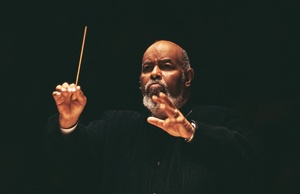 James DePriest, the former music director of the
Oregon Symphony, will return to Portland for a
three-day event, March 10 through 12.

DePriest returns to the podium for "Sweeping Excitement," featuring Tchaikovsky's Piano Concerto No. 1, on March 10 at 7:30 p.m., March 11 at 7:30 p.m. and March 12 at 8 p.m. in the Arlene Schnitzer Concert Hall.
Chosen by Leonard Bernstein in 1965 to become assistant conductor of the New York Philharmonic, DePreist has appeared with every major North American orchestra. In 2005, President George W. Bush presented him with the National Medal of Arts, the nation's highest honor for artistic excellence. He is the permanent conductor of the Tokyo Metropolitan Symphony Orchestra and director of conducting and orchestral studies at the Juilliard School.
Regarded as one of the world's top interpreters of Scandinavian and Russian classical music, DePriest is known throughout the world as a respected conductor. During his time with the Oregon Symphony, DePriest was one of the only African Americans conductoring a major orchestra – following in the footsteps of his aunt, singer Marian Anderson, the first Black woman to ever appear at New York's Metropolitan Opera in 1955.
One of the most popular piano concertos in the symphonic repertoire, Tchaikovsky's Piano Concerto No. 1 was initially deemed a "strange, wild, ultra-modern Russian concerto" by critics. Indeed, the writing for the soloist is quite difficult, as Tchaikovsky was not a pianist and did not have an understanding of the instrument. Van Cliburn won the First International Tchaikovsky Competition in 1958 with this piece, much to the astonishment of people worldwide, as he was an American competing in Moscow at the height of the Cold War.
The Symphony also will  perform Rachmaninoff's "Symphonic Dances." His last composition, the work demonstrates the composer's preoccupation with death in his later years. The piece features all the hallmarks of his signature style: sweeping romantic melodies, fiery passion and tender intimate moments. It also features several liturgical chants from the Russian Orthodox church.
Included in the program is the Symphony premiere of Khachaturian's "Lezghinka" from "Gayane." Said the composer, "I consider the ballet a great art. For in the ballet it is possible to express all the diversity of man's life and wealth of emotions."
The broad themes include the resistance of the people against a common enemy and victory over oppression. Like all Soviet composers, he had to walk the fine line between his own artistic inclinations and the specific aesthetic dictates of the Soviet government.
Tickets are $20 to $88 and may be purchased at the Oregon Symphony Ticket Office, 923 S.W. Washington.  Ticket office hours are 9 a.m. to 5 p.m. Monday through Saturday.  Tickets can be charged by phone at 503-228-1353 or at 800-228-7343, 9 a.m. to 9 p.m. Monday through Friday, and from 9 a.m. to 5 p.m. on Saturdays.
Tickets may also be purchased at Ticketmaster outlets or by calling 503-224-4400.