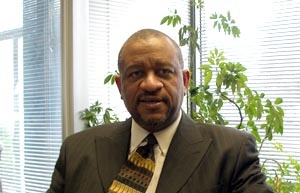 With the exception of two years in the private sector, Charles Hill has devoted his life to public service.
In town since early January, Hill is the Pacific Northwest region's new acquisition management director and the region's highest-ranking African American U.S. Forest Service official in the Northwest.
Hill's title at the agency is really just a technical term for an individual who buys and sells property. He also is in charge of contracts with organizations that do volunteer work, construction and service contracts.
The Forest Service owns and leases a large number of properties across the country. Many of these buildings are ranger stations located in remote areas of the wilderness; others are administrative buildings located in more urban areas.
Hill says that over the past 10 years agency leaders have pushed to reduce overhead costs, reduce the number of unneeded or underutilized buildings and reduce lease costs in administrative buildings.
In the Pacific Northwest, officially known as "Region 6," Hill said many properties are underused because the organization is much smaller today than it was 10 or 20 years ago. Region 6 employs 3,600 employees today — down nearly 5,000 from the 8,300 employees it had in 1992. Knappenberger says the decline is largely due to the protection of the spotted owl.
The agency has been allowed to profit off of property sales since 2005. Before that, Hill says, buildings could be offered to other public agencies, but the Forest Service received no direct benefit. Now that property sales go back into the agency's coffers, Hill said the agency has developed a slightly more "private industry" mindset. Still, there are regulations on how the agency sells off unused property.
Admittedly, Hill said the Forest Service doesn't have the best record when it comes to hiring a diverse staff. But when it comes to labels, he said, he would prefer to be judged on the merits of his work.
"I don't see (being Black) as a burden," he said. "I don't wear my diversity on my shoulder.
"I do advocate increased diversity. I see where we fall short."
Of the 3,600 employees in the Pacific Northwest region, only 40 are African Americans.
Whether it is a lack of outreach to Black urban populations, a lack of awareness, or both, the Forest Service typically has a harder time filling ranger spots with African Americans. Hill said Blacks are typically well represented in administrative posts, but as the agency centralizes, those positions will be located in one area of the country.
"There is a lack of awareness that (ranger) opportunities even exist," he said. "We're making it more known. There are great opportunities out in the woods."
Knappenberger said the agency is making a concerted effort with outreach programs to increase the number of African Americans employed by the Forest Service.