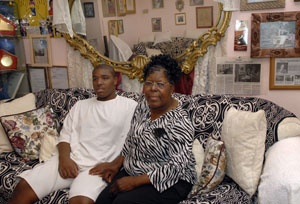 Pastor Mary Overstreet-Smith of Northeast Portland knows what it's like to care for an autistic child.
For the past 12 years, Overstreet-Smith has cared for her great-grandson, Sir J. Millage, who suffers from a severe case of autism. When Millage, 16, needs help preparing food or adjusting the water temperature for his baths, Overstreet-Smith is there. When he needs guidance doing the small things most parents take for granted, Overstreet-Smith is there. When police found Millage walking across the Broadway Bridge one cold December evening in 2006, shirtless and barefoot after sneaking out of a bedroom window, they deployed their Taser gun 14 times when the 5 foot 10 inch, 260-pound teenager didn't respond to verbal commands, Overstreet-Smith was there to pick up the pieces.
She has overcome many difficulties over the past 12 years, but lately this great-grandmother has noticed something that bothers her more than all the challenges that go along with keeping Millage healthy and happy – in all the time that Overstreet-Smith has cared for Millage, not once has she been invited to gather with other caregivers of children with autism.
"We have never been invited to a day camp, Christmas event, outing, dinner, or anything for autistic children," Overstreet-Smith says. "That has bothered me."
Now this 70-something pastor, who founded the Powerhouse Temple Church and was once written up in The New York Times for the health clinic she started in North Portland to help low-income refugees from New Orleans, wants to shake things up.
She is trying to establish the Sir J. Millage Autistic Center for Change, an all-encompassing, nonprofit center for any child afflicted with autism. The center would serve as a temporary care center for those with autism requiring constant supervision; a training center for everyone on the autism spectrum; and a resource center for parents and caregivers.

Autism is becoming a big problem in this country, and the numbers don't lie. In Oregon alone, the number of autism cases increased from 550 in 1992 to 3,759 in 2003. Nationally, the Centers for Disease Control estimate 5.7 per 1,000 school-aged children were diagnosed in 2006. The prevalence of the disorder has grown by 583 percent since that same year compared with 27 percent growth of all other disabilities, and the Centers for Disease Control estimate that $35 billion is being spent annually for people with autism age 21 and younger.
Autism, a debilitating neurological disorder that can affect a person's ability to connect to others, control behavior or function in society is now the fastest growing developmental disability in the nation.
While the disability appears equally in all ethnic groups, recent studies indicate that Black children are diagnosed at a much later stage than White children – and are not getting the early intervention they need. A study by Dr. David Mandell of the University of Pennsylvania found White children with autism were diagnosed after an average of four doctor visits in a four-month period; while Black children were diagnosed after an average of 13 visits over a 10-month period.
Another study, published by the Duke University Center for Human Genetics in July 2006, suggests that Blacks may actually be at greater genetic risk for developing autism.
"Certain symptoms associated with autism, such as delayed language development and problems handling daily life tasks are more severe in African American individuals with autism than in Caucasians," said Dr. Michael Cuccaro, Duke clinical psychologist and study co-author.
But Overstreet-Smith isn't drawing racial lines when she talks about autism – she just wants families of any autistic child to be able to get the help they need.
Overstreet-Smith, who founded Harvest Time Ministry T.V. and the North by Northeast Community Health Center, hopes to fund a center that would offer autistic children and adults a quiet place to relax, learn about the disability and just be themselves.
"There has to be an outlet for individuals with this disability," Overstreet-Smith says. "…I wanted to make a change … and now is the time."
Overstreet-Smith wants to focus on filling the needs of families dealing with a child or adult with severe autism, who often get few breaks from supervision. One of the primary functions for the center would be to provide a drop-off service for those with autism – at no cost.

Autism Center of Oregon Director Genevieve Athens says Overstreet-Smith has many challenges ahead of her.
Finding enough money and enough people to handle difficult cases will be tough, Athens said. Currently, respite care providers typically offer at-home care at a price many families can't afford. Athens said providing a care center would require trained individuals – from speech pathologists to special education teachers to social workers.
"There is nothing quite like this here," said Athens, who thinks the proposed center would meet an unmet need, especially among low-income families.
Many parents receive little help once their child has outgrown the public school system, and adults with severe autism have few options. Many are forced to live with family members, stay in group homes or end up in the criminal justice system.
Overstreet-Smith is not alone in her endeavor. For the past 10 years, Kathy Henley has been working to establish an autism center that would meet a different need than Smith's. Henley said the autism community needs a central building in Oregon to serve as a resource center, research institute and medical clinic.
"Families and professionals working with autism don't have a place that is central," she said. "Without this, our community will always be split."
Henley has always run into a lot of support for the idea of the center, but has had trouble garnering financial support. She says more research is needed to identify the genetic, dietary and environmental triggers. Despite having no clear cure, Henley says therapy — and early intervention — can help children with autism lead better lives. Her son, a 26-year-old with classic autism, is able to hold a part-time job at a grocery store in Northeast Portland — but only after years of dietary, drug and developmental therapy.
Anyone interested in assisting Overstreet-Smith should call 503-380-4401, or email her at pastor_maryovst@yahoo.com, or visit www.powerhousetemplecogic.org for more information.