Helen Silvis of The Skanner News
Published: 30 May 2013 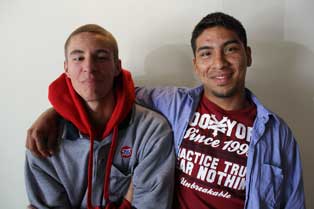 At just 19 years old, Byron Weiss (L) and Gabriel Martinez are working hard to put their juvenile justice records behind them. They both credit the SE Works Civic Justice program, not just for helping them find work, but for giving them hope for the future.

"It's a good program," Martinez says. "For kids who have been incarcerated this program gives us a second chance to make a change. I would recommend it to any youth who are struggling."

In the program, youth spend time in class and time volunteering at work sites, such as a warehouse and store run by Habitat for Humanity. They can also gain credentials, such a forklift certificate.

"I'd never had a job or anything like that," Weiss says. "So when I came here I really had no experience. Since I got here I've had three jobs. I learned how to send thank you letters after interviews, how to do cover letters. Now I'm working I try to come in at least once a week to get help to better myself."

Both young men entered the program owing big restitution fines. Martinez, who works 41 hours a week at Grocery Outlet, says he's grateful he had the chance to pay off his fine. It's taken a big weight off his shoulders, he says. Now he's saving up to get an independent place to live.

"By doing what I need to do I can make my mother proud of me," he says. "It feels good to see that smile on my mom's face when I go to her on my time off."

Weiss, who works between 32 -40 hours at a 76 gas station, says he wants to be the first in his family to go to college.  "My family live paycheck to paycheck.," he says. "So that's all I thought was possible for me. When I came here I realized more was possible."

Asked about long-term career goals, both men say they think about joining the military or working in parole and probation.

"I could really help kids out there because I've been there and done that," Weiss says. "I have used drugs and got out of it. I never thought I could, but I can. So I think I could inspire them."

Perhaps the biggest gift they've received from the program is hope.

"You've got to believe," Martinez says. "Never give up. That's what this program taught me."