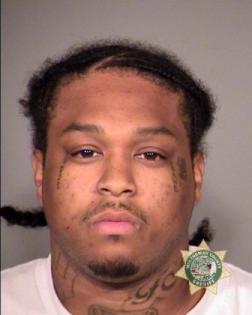 Police have arrested Emanuel "Manny" Dante Hall, 25, in connection with an exchange of gunfire in the early hours of Saturday May 18 outside Diamonds Gentlemen's Club on Northeast Sandy Boulevard. Hall is in custody at Multnomah County jail.

Hall was charged with Attempted Murder, Unlawful Possession of a Firearm and Unlawful Use of a Weapon. Police were called to the clubs parking lot, 3390 Northeast Sandy Blvd. at 2:40 a.m. No injuries were reported but the police investigation concluded that gang members were shooting at each other.

Law enforcement have named Hall as a gang member on previous occasions. He was taken into custody in May 2011 after being discovered in Seeznin's bar and grill on 82nd Avenue. Police said he had brought a firearm into the bar. Seeznin's was closed down soon after.Gang Investigators are continuing to investigate Hall's case and would like to hear from anyone with information about the shooting.

Anyone with information is asked to contact Detective Todd Teats at (503) 823-2137 or [email protected].