Lisa Loving of The Skanner News
Published: 17 May 2013 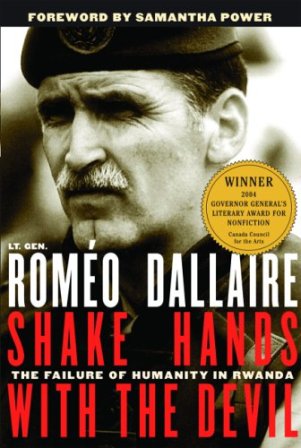 Canadian Senator Romeo Dallaire was in Portland last weekend to deliver the commencement address for Lewis & Clark's College of Arts and Sciences graduation ceremonies Saturday, May 18.

Dallaire commanded the United Nations Assistance Mission for Rwanda and is the author of "Shake Hands with the Devil: The Failure of Humanity in Rwanda," a first-hand account of the world's, and his own, failure to stop the 1994 genocide.

The Skanner News spoke with Dallaire before the commencement address, about his work, the ongoing issue of child soldiers, and the young generation's power in making positive changes in the world – including for African children victimized by war.

The Skanner News: Sir, you have been through horrors that most of us in this country will never have to face. And you have dedicated your life to trying to right some of the wrongs you have witnessed and even participated in. What message are you bringing for our young college graduates at Lewis & Clark?

Romeo Dallaire: I am going to describe them as being the new generation of activists in a revolutionary time. I am actually going to tell them that they are members not of an X, Y or Z generation, but they are members of a generation without borders. That they have gone global – they've gone worldwide – and because of this revolution in communications, they in fact can coalesce and be a significant balance of power in the democracies of the world.

And so I'm going to empower them, I hope, with this sense of participation in advancing humanity -- because we can actually speak of the whole of humanity. We are soon going to be able to Skype anybody in humanity. So it's no longer a foreign thing, it's actually human beings that you can see and talk to and speak of.

And so I'm going to project with them how they can be a generation that's going to move others aside because they are mastering this new revolutionary capability that's been put in their hands.

I'm also going to indicate to them that no matter how advanced the 20 percent of the 'haves' of the world can progress, we can't simply and pretentiously articulate that humanity is advancing when 80 percent are living in abject poverty with no hope.

And so I'm trying to articulate for them that they, individually, want to participate in a rite of passage -- post-undergrad or maybe even possibly post high school -- and go into developing countries and get their boots dirty. That they will have under their bed that pair of dirty boots, that they went into these countries and talked and felt and lived what is happening to 80 percent of humanity. And bring that passion back and change it.

TSN: Sir, about a year ago – as you were just talking about this new media – we saw a viral video that became a news story in itself, and it was about Joseph Kony. You've been doing work around the issue of child soldiers; you created the Will to Intervene Project. Can you talk a little bit about the work you are doing today and how everyday people can plug into it – because there is obviously a deep hunger right in this country to try to make a difference there.

RD: I think the awareness in this particular cause can have legs, where maybe other causes are more difficult to explain or difficult to engage people in. We're talking about young boys and girls who have been turned into weapons of war because of the proliferation of small arms, and because of their availability. Adults in these conflict zones, in these imploding nations, are using the simplest tool – yet it's become the most effective tool of combat in these developing countries.

So the argument that I present is that in our country we put everything in motion when we have an Amber Alert, when we have one of our own who is abducted or something like that. And yet we are standing by and letting over 200,000 children at any time of the year to be used and abused and drugged up and raped and so on, as weapons of war. And they are now the primary weapon of these wars.

And this is where, I think I can argue, that it's not good enough to simply rehabilitate and reintegrate them after, we've got to actually prevent this. We've got to reduce these numbers and that's why my research and the research we're doing in the field is important.

I actually sent a team into Sierra Leone yesterday because the president of Sierra Leone has given us the mandate to retrain his whole army, all his police forces, and to influence the content of the curriculum of primary schools in regards to how to prevent the recruitment of child soldiers.

We give new tactics and methodologies to the police and to the military when they face child soldiers -- without having to kill them. And so we're actually into a five-year program there and we're spreading it out throughout sub-Saharan Africa right now, and actually neutralizing that weapon.

So when we talk in terms like that we are specifically talking about the peers of our children and pulling them out of the war zones, out of being the weapons of war, and more importantly, preventing them from becoming one.

TSN: And what can we do to help with that because I'm guessing everyone's on board with you.

RD: Your optimism is the greatest encouragement. What you can do in fact is rather interesting – is encourage the youth of our nations to be engaged. Because I believe that their engagement – either individually or through what this new power base is around the world which is the NGO community http://www.ngo.org/ngo3.htm   – they can influence public opinion and policies. These kids can either join one or create their own, and through them be able to coalesce tremendous amounts of influence in order to create these international policies and certainly influence public opinion.

And that's where I think the effort's got to be, encourage them to join and engage in NGOs, go out there for a week, a month, get your boots dirty, come back, and with that zeal, that passion, of what you've seen and heard and felt and tasted, you can create through the revolutionary communications a coalescing of the youth that influence ultimately their parents, and start that attrition of the use of children as weapons of war.

TSN: So I know people are going to read this and they are going to rush right to their phone or computer to sign right up. Are there any organizations that you know of that are NGOs that are actually providing people with the opportunity to plug in that way?

RD: Well there is the Child Soldier Initiative itself, out of Dalhousie University http://www.childsoldiers.org/  which is leading the charge in the countries where conflict is going on. We've been working through Rwanda, Botswana, South Africa; we've been training even into countries like Cote D'Ivoire. We are looking at this new phenomenon of child pirates, where they're using the youth of Somalia to be pirates, so we're actually looking at resolving that problem. So one is, support that Child Soldier Initiative and it's on the web, it's easy to find.

And then secondly, we do work with certain NGOs who I think are the more progressive ones in trying to reinforce our efforts. And that would be UNICEF International, although that is a UN agency. And Save the Children. They are, to me, excellent – my experience in the field in Sierra Leone and of course Rwanda reflects that.

TSN: Are there other colleges with a Romeo Dallaire scholarship for their students?

RD: Well that's very interesting. There is one that is being done at Dalhousie, and it's from the Romeo Dallaire Child Soldier Initiative that's got a scholarship for two students every year. The funds for that were put together by the Royal Military College of Canada – your equivalent to West Point. And they climbed Kilimanjaro and collected over $30,000, and their effort continues.

And these cadets realize that one day they may have to face child soldiers. By supporting us they hope to actually reduce that possibility. It's a long term effort – perseverance – and the fact that this is not building a school; this is preventing, ultimately, countries to recruit children to destroy schools. And that's what we're after.