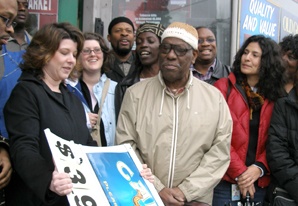 Kelly Stoner of PacWest Communications, left, and
Frederick Jackson of The Bridge Builders put a
cigarette sign in the trash at Going Street Market,
as Kylie Minor, Yugen Fardan Rashad, Joann
Bowman and others look on.


On a storefront that was once covered in nothing but tobacco advertising signs, one sign now stands apart from the rest.
"Tobacco kills an estimated 45,000 African Americans every year," reads a sign on the front of the Going Street Market.
The sign symbolizes the goals of the African American Tobacco Prevention and Education Network, which is canvassing storeowners throughout Portland in the hopes that many will replace tobacco advertisements with tobacco warnings.
While anti-smoking literature and advertising is now becoming more accepted and pervasive than in years past, the program coordinator for the project, Yugen Fardan Rashad, says decreasing the amount of cigarette advertising in the African American community will prevent future generations from getting hooked on tobacco.
The network, which operates under LifeWorks Northwest and is funded by a grant from the Department of Human Services, is partnering with a number of different community organizations – including MOregon Action, The Bridge Builders and Brother to Brother. Their ultimate goal is to replace tobacco advertising with their anti-smoking signs. But that's not as easy as it sounds.
Going Street Market owner Charles Bedford said tobacco companies require stores to display advertising if they want to sell tobacco products at discount prices.
"That's why it's so hard to get these store owners to take down the ads," Rashad said.
The Going Street Market owner took a risk last week and tore down the tobacco ads covering his building. Bedford said, "he's concerned about youth and tobacco," so the risk of losing some customers didn't dissuade him.
"The economic impact is yet to be seen," he said Friday, Feb. 16, after taking down his signs.

The campaign began when Frederick Jackson, president of The Bridge Builders – a volunteer organization dedicated to removing destructive barriers to a child's development — drove two groups of students from the Prospective Gents Club and the Imminent Ladies of Virtue to tally the number of cigarette advertising in the front of 100 stores throughout Portland.
Jackson said they found 1,671 different pieces of advertising. The results of the survey, he said, didn't surprise him.
Tyrone Waters, co-chair of the African American Tobacco Prevention and Education Network, wasn't surprised either.
"I strongly believe they are disproportionately targeting the African American community," Waters said.
Waters' father was a smoker who died from lung cancer. Now Waters' is working with his mother, state Sen. Avel Gordly, I-N.E./S.E. Portland, to come up with a legislative solution.
"I have relied on her to send the message to other legislators," he said.
In a statement issued last week, Gordly said she was troubled by the results of the survey and that it is an "old practice stretching back decades that must stop."
Gordly is currently sponsoring Senate Bill 419, which would prohibit smoking in all restaurants, bars and taverns. But while lawmakers such as Gordly are working to curb smoking, tobacco companies are still contributing to the coffers of many lawmakers.
According to a report from the Money in Politics Research Action Project, contributions from tobacco companies to Oregon lawmakers totaled $106,700 in 2005, with Senate Democrats receiving $26,350, Senate Republicans getting $27,850 and House Republicans receiving $52,500. House Democrats didn't get any tobacco company contributions in 2005. Tobacco companies also spent $217,184 in 2005 to lobby lawmakers in Oregon, up from $155,182 in total lobbying expenditures from 2004. Figures from 2006 are not yet available.

In the tobacco ads surveyed by the network, four brands led the pack – Camel, Kool, Newport and Marlboro.
According to the network, the most heavily advertised brands are the same brands most popular among underage smokers. Another fact that weighs heavily on Rashad and others is the disproportionate health effects tobacco takes on African Americans. According to the American Lung Association, Black men are 50 percent more likely than White men to develop lung cancer.
Joann Bowman, associate director of Oregon Action, said the ads do serve a purpose – they prepare the next generation into thinking smoking is the community norm. Although Bowman is a smoker herself, she said it would unacceptable to let a new generation succumb to tobacco addiction as easily as the last.
Darryl! Moch, executive director of Brother to Brother, an outreach organization for gay and bisexual Black men, said there also is anecdotal evidence linking smoking with drug use. Being gay and Black is a double whammy for cigarette marketing exposure, Moch said, because makers of unhealthy products tend to also target the gay community.
Midge Purcell, of the Urban League of Portland, said her organization is fully behind the push to reduce the amount of cigarette advertising in stores.
Now that the network has convinced one storeowner to replace a tobacco ad with an anti-smoking ad, it's up to the community to follow suit. Rashad said he and others would pressure other storeowners to join in the network's campaign.
"As a community, we have to rely on ourselves for our health care," Moch said. "We will help people see why not to smoke."