Lisa Loving of The Skanner News
Published: 15 May 2013 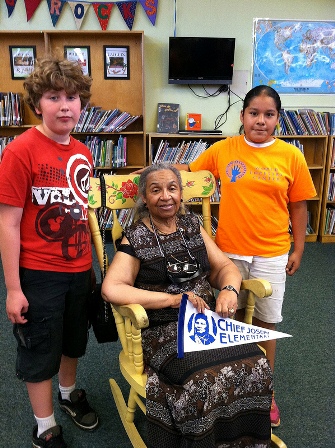 Students at Chief Joseph Elementary last week had about the biggest surprise imaginable: The great-granddaughter of Chief Joseph himself came to visit the school library on Friday afternoon.

Elizabeth Britton, 83, a retired nurse and nursing instructor at Oregon Health Sciences University, and a current resident of Lake Oswego, settled in a rose-painted wooden rocking chair among the books while about a hundred students were brought in, class by class, to meet her and ask questions about her ancestor.

School Principal Joseph Galati brought Native American students to meet Britton face-to-face. Some appeared to be Black, like Mrs. Britton herself; one, a boy, had white skin and a very long traditional braid.

One young girl admitted that she did not know her tribal affiliation.

District officials say that Chief Joseph is off the list for closure and that plans to "phase it out" have been dropped; the school building will remain open, which is good news to those who have worked to build a Nez Perce Garden overlooked by a gorgeous new mural of Chief Joseph's face on the school grounds.

Nevertheless Galati, a beloved figure at the school who knew almost every single student by name, is transferring to Llewellyn Elementary in Southeast Portland next month. Friday's visit was arranged as a surprise for Galati and the students by Mariah Taylor, a nursing colleague of Britton's.

"It took us a long time to get her over here, but better late than never," Taylor said. "I just think it is so important for her to see this school and for the children."

At times Galati had tears in his eyes as he led the students in questions and cautioned them that, "Mrs. Britton is not going to tell many stories about Chief Joseph because they are very sad."

Still, what most kids wanted to know was – what was the Chief Joseph really like?

One of the most respected and admired indigenous leaders in U.S. history, Joseph led the Nez Perce in Wallowa County, just as white settlers began to push the Native Americans completely out of the territory.

In 1877, the federal government decreed the Nez Perce were to be removed to a reservation in Idaho. Gen. Oliver Howard – who Howard University was named after – was given the job of subjugating the tribe and promptly threatened an attack. In response, three young warriors killed four white settlers.

To avoid a major bloodletting against the women, children and elders of the tribe, Chief Joseph decided the entire community would flee to the Canadian border to join Chief Sitting Bull in a country where the government was not trying to wipe out indigenous people.

The tribe, some 700 strong, raced across the Bitterroot Mountains, toward the Midwest and the northern border, eluding Howard for more than a thousand miles.

Chief Joseph and the Nez Perce never made it. Just 40 miles from the Canadian border – starving and exhausted -- they were overtaken and defeated by another general, and ultimately exiled to Oklahoma.

What Chief Joseph said then is one of the most famous quotes in American history: "From where the sun now stands, I will fight no more forever."

In the classroom surrounded by elementary schoolers, Mrs. Britton was asked the same thing multiple times by every class: What was your great-great grandfather like?

And every time, Galati answered gently for her: "Mrs. Britton didn't get to meet her great-great grandfather because she wasn't born yet."

As each class gathered around her, students reached out to touch Mrs. Britton. Many offered hugs. A few asked for autographs.

"This is the most incredible experience," Galati said. "I wonder if these kids really understand what this means. I wonder if they'll remember this day. This is a once in a lifetime experience.

"I am never going to forget it."

Check out all of the Skanner News photos of Britton's visit to the school here.