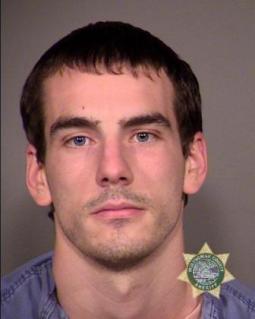 A man who was arrested in 2009 for putting glue in women's hair and cutting it while riding the bus, has been arrested again. This time, Jared Weston Walter, 26, was taken into custody after a witness told police he had ejaculated on the back of a woman's head.

Walter is charged with  several counts of Sex Abuse in the Third Degree, Interfering with Public Transportation, Harassment, Disorderly Conduct in the Second Degree and Public Indecency.

The arrest occurred Monday, May 13, at the downtown transit mall. Walter left the scene on a bus, but police say they took witness statements and DNA. The investigation found Walter may have committed similar acts during the last three weeks, once in Clackamas and once in Portland. Police says victims at the time did not realize what had happened.

Witness descriptions and TriMet surveillance video helped police identify Walter, who had recently been paroled from prison, and is under supervision through Clackamas County.

Police say Walter behavior follows a pattern. He sits or stands behind woman, touches her hair and masturbates. Previously, police say, he was a frequent passenger on bus lines between downtown Portland and Milwaukie or Oregon City, including lines 31, 33 and 99.

Walter is in custody at the Multnomah County Jail. Police describe him as a white male, 5'8", 145 lbs with short brown hair. He often wears a black leather waist-length jacket and blue jeans.