Bruce Poinsette of The Skanner News
Published: 10 May 2013 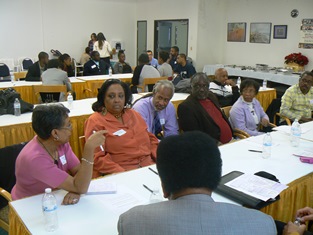 "The idea behind the forum is to literally create, within the Portland African American community, a safe place for us to talk to us about the stuff that's going on with us," says Chabre Vickers, a member of the PAALF Civic Engagement and Leadership Development Committee. "It's really working on your inner self while being able to work towards a larger goal."

The event brought Black people from across the age spectrum together to accomplish three objectives, which were breaking barriers, discussing intersections, and building bridges. According to Vickers, the idea was to have rich conversations that address things that are preventing the Black community from moving forward. Specifically, participants focused on building relationships that could support Black community members in the work they do in their everyday lives.

The forum tackled ageism and future events will look at other "isms" such as classism, sexism, and homophobia.

"Collectively, Portland has absolutely fantastic and outstanding African America citizens who are all, in their own right, doing a lot of great work," says Vickers. "Often times, we do them in our own silos but coming together and connecting is the key. You can't connect if there are inherent barriers simply based on generation, gender and different things like that.

"The Movement is at stake and we cannot allow for interpersonal issues to continue to create a barrier to our greatness."

The intergenerational forum included food, fellowship, large cohort activity and smaller caucuses. Different age groups were able to discuss their identities and priorities amongst themselves before gathering with the larger group to build an action plan.

The groups were separated into the Baby Boomers, Generation X and the Millennials. They were given a set of questions, such as what events defined their generation, how other generations think of them and what they wanted to pass down to the younger generations.

When the larger group came back together, they discussed what each age group passed on to the other. Boomers discussed their access to education and trying to provide their children with everything they didn't have growing up. Generation X contemplated the effect of the drug war and specifically, how drugs were shipped into Black communities at such high rates. They noted that they were the only group where the female to male ratio was disproportionate. The Millennials discussed being products of the "Information Age" and how that's been both positive and negative.

One member of the Millennial group noted that as each generation described itself, they got progressively more negative, pointing out that the first statement from the Boomers was that they were Black and proud. However, a Boomer contended that the Millenials are the most educated generation, are as talented as anyone and most of their self-assessments are based on the perceptions of others who don't acknowledge these things.

Vickers says the event was about the gems shared between the groups. She recalls the words of Maya Angelou.

"When you get, give. When you learn, teach," says Vickers. "That, in a few simple words, says it all."