Governor Pledges Health Care for All 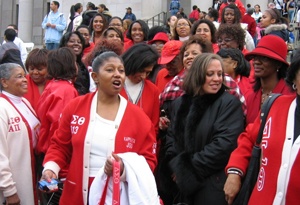 Members of the Delta Sorority rally in front of the state
capitol during the 2007 African American Legislative
Day on Monday, Feb. 11.

More than 1,500 people flooded the state capitol building in Olympia Monday for the annual African American Legislative Day to discuss important community issues with local lawmakers.
Attendees had the chance to meet with their local legislators, attend youth and adult workshops, hearings and tours of the capitol and rotunda. Groups from churches, social-service organizations, businesses and youth from several schools attended workshops on issues such as health care, education, civil and human rights, employment, juvenile justice, school dropout prevention, the offender re-entry program and entrepreneurship.
The day featured adult, teen and children's programs and workshops, an all-ages rally packed the capitol steps and a six-block "Procession of Hope" march to the capitol building.
Gov. Christine Gregoire addressed the crowd at the noon rally on the capitol steps. The governor spoke of healthcare for all Washingtonians by the year 2012; health care for all children by the year 2010, and leading the nation in providing health care coverage for children by making sure children are immunized by providing free vaccinations to every child in Washington State; and expanding the number of new jobs and investing in minority- and women-owned businesses.
"People say put your money where your mouth is and so I've tried to do that." Gregoire said. "I've put in $2.4 billion more dollars in education for our children. Let's make the message clear that Washington stands for helping everyone, everyone has healthcare, everyone has a great education and an opportunity at a great paying job."
The governor thanked Mt. Zion Baptist Church, Tacoma Pierce County Black Collective, the Tacoma Urban League, NAACP and the Bremerton African American Ministry Alliance.
Sen. Rosa Franklin, Washington's only African American senator, told the students that, if they stay in school and stay off drugs, they can be whatever they want to be.
"Today you are here at this capitol, this is your capitol, this capitol belongs to the people of the state of Washington and all who are here today, don't just show up for one day but go back into the communities to work," Franklin said.
The Democratic senator stressed going back in the community and tackling the issues that were discussed, instead of just rallying for one day.
"Go back into your community and work on the issues, today is a day of coming together and taking that message back to the community to really push the issues," Franklin said, speaking specifically about health care, education, contracting, jobs and the significant high school dropout rate among Black youth.
"By coming together we're putting a face on the issues and saying this is what we're pushing for, and we're going to be proactive about it," Frankin said.
"Being Black History Month, it's important that we come together in order to show our strength in the African American community and we can achieve all the goals we have set forth," she said. 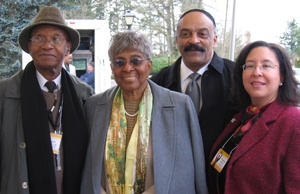