By Helen Silvis of The Skanner News
Published: 30 April 2013

Hales unveiled the proposed budget Tuesday at City Hall, saying the budget shortfall of $21.5 million demanded tough decisions. He said the budget looked closely at overtime spending and management structures first. Hales also fixed funding for every City Commissioner's office, so they no longer are staffed with bureau funds. The budget proposes to cut 185 jobs including 55 from Portland Police Bureau and 42 from the Fire Bureau. 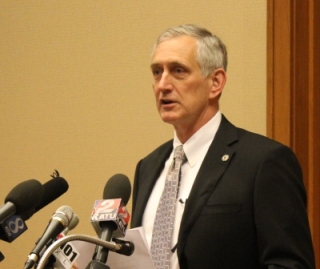 Water and sewer rates will rise by 3.6 percent and 5.3 percent, less than the bureau staff requested. But Hales said raising taxes just  as Portland emerges from recession, did not seem like a good idea.

The good news was that the budget protected funding for Portland Parks-operated SUN schools, and the David Douglas SUN school. The East Portland Action Plan, which was heavily supported at budget hearings also kept funding, with the warning that this is the last year it will be funded.

Unlike previous years, Portland's Police and Fire bureaus will lose staff. The mayor's budget  calls for a reduction of 55 positions in the police bureau. But because Police Chief Mike Reese has kept 38 open positions vacant, fewer officers will be laid off. All but four school resource officers will be kept in public schools.

The mayor allocated $708,000 to fund 11 officers nearing retirement, in an effort to keep new hires to the bureau.

In the Fire Bureau, Hales decided not to close any fire stations, but instead to use smaller two-person teams instead of four-person teams, more of the time.

Along with cuts to every city bureau, the budget also eliminates:

Symphony in the Park

Funding for the Multnomah County Crisis center: Hales says police could not use it

Commissioner Steve Novick released a statement praising the budget for the most part.
"I am very pleased with, and frankly relieved by, many of the choices the Mayor has made in his proposed budget," Novick said. "I was thrilled to see that the Mayor preserved the safety net programs for our most vulnerable citizens…I am also glad to see the East Portland Action Plan and the David Douglas SUN school programs preserved."
Novick offered two main criticisms. He said he believes the Fire Bureau should be reorganized, and that the plan to cut five police positions from property crimes, and two from vice should be changed. The War on Drugs has not been a success, he noted, and most people want police to help with property crime.
"I would like to see fewer cuts to property crimes investigations, paid for by deeper cuts to the Drugs and Vice Unit."