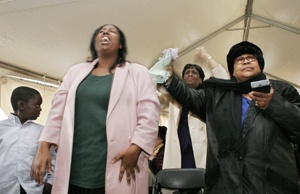 Members of the New Generation Revival Church, which also was destroyed in the fire that claimed the Morning Star Mission Baptist Church last week, rise to their feet as their pastor, the Rev. Johnasen Pack, not pictured, gives an impassioned address to the multi-church congregation on Sunday, Feb. 11. Pictured from left are Madison Jackson, 9, Dana Jackson, an unidentified woman, and Mother Robinson.

Fire investigators have not yet revealed cause of devastating fire

Wardell Gibson is standing near the charred remains of his childhood church, gazing through a chain-link fence at firefighters salvaging bricks from the skeleton of the Morning Star Mission Baptist Church.
Gibson's family has attended the church for generations, and he said losing the building, which was lost to fire last week, was very emotional.
"So today I decided to see it for myself," he said. "You can't describe it. So many memories; so many families; so much history."
Gibson said he has just one hope: that the cause of the fire was not intentional.
Fire investigators have not released any information about the fire's cause, said Portland Fire spokesman Lt. Allen Oswalt. Samples from the scene have been sent to a laboratory for examination and officials with the Metro Arson Task Force are awaiting results, Oswalt said.
Many in the congregation and the community share Gibson's hope that the fire was accidental.
State Sen. Margaret Carter, D-North Portland, said she was deeply saddened by the loss of such a historic landmark. Carter, who performed in a choir at the church, said the building's destruction is a loss for future generations.
"This is the biggest loss of any kind of historical architectural design I can think of (in North Portland)," she said. "It was just elegant to walk up those steps."
The members of Morning Star Baptist, as well as the New Generation Revival Church – who shared space at the building – can't walk up those steps any longer, but that didn't halt Sunday services.
One Sunday, Feb. 11, Pastor Albert Johnson, of Morning Star Baptist, greeted the mixed congregation with words of hope, despite the tears, sadness and grief surrounding him.
"The Lord knows how to bring a community together … in this case, he chose fire," said Johnson to the dislocated congregation who were gathered under a tent on Northeast Cook Street.
Members of the Oregon National Guard helped set up the tent used for Sunday's services, and also provided the chairs and risers, said Major Mike Warrington. He said the Guard also offered their office space to the church.
During the emotionally charged service, Johnson yielded the floor to several other local pastors, Sen. Carter and Portland Mayor Tom Potter.
Pastor Johnasen Pack, of the New Generation Revival Church, said God was trying to "teach us how to rally together when we have no building."
Mayor Potter offered words of encouragement, saying that the city was behind rebuilding, and he would be talking to the different bureaus to ensure that "we can come together and create something golden out of the ashes."

Remembering 'a beacon in the night'

Several days after fire ripped through the 88-year-old church, many members of the church and community came to see the rubble.
One former member, Marie Matthews, couldn't believe the church she had attended from the age of 9 until marriage had burned to nothing.
"I heard about it the morning after," Matthews said, holding one of the hundreds of bricks salvaged by firefighters in the days after the church burned. "The first thing I said was, 'Get out, quit playing.'"
As Matthews talked with another church member at the scene, one of the sons of founding Rev. Sylvester McCullumn came to pay his respects. Now a devout Jehovah's Witness, Ellis McCullumn had tears in his eyes as he recounted his father's early days at the church. McCullumn said his father gave up his role as a union leader to become a reverend.
"He sure could hold a community together," McCullumn said. "He had a great impact on people here."
The loss of such a historic part of the community, McCollumn said, is devastating.
"It hurt, it hurt," he said. "It was almost like a beacon in the night."

Keeping the congregation together

Holding church services at the site was important for the mourning period, Johnson told the crowd.
"We plan to stay right here," he said, alluding to rebuilding plans. "We might have been burned out, but our passion is burning."
And that passion isn't just burning within members of the Morning Star congregation. Many in Sunday's congregation were visitors to the church, including Willie Bowles. The tall, gray-haired Bowles said he came to the church as a kid in the 1950s. Although he is a member of a different congregation now, he decided Morning Star needed his help.
Bowles brought a huge, black plastic bag to church services Sunday. And when he plunked that bag filled with quarters, dimes and nickels into the collection bucket, the ushers on the receiving end had to use both hands.
Executive Deacon Lee Magee said support has been coming in from all corners of the country. A catastrophe fund in Morning Star's name was set up at Wells Fargo Bank at the Lloyd Center, and money has been donated by many local churches, businesses and individuals.
Magee is grateful for the outreach, but said his main concern is keeping the congregation together as church officials make a plan to rebuild on the same site.
"It won't be easy," he said. "But by coming together, working together, we can do it."