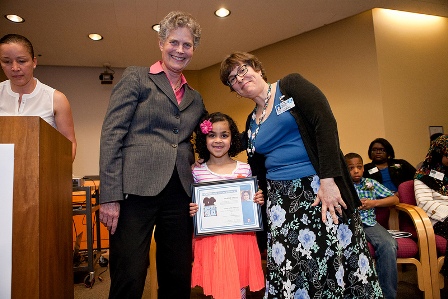 This month Portland Public Schools held one of its most important annual celebrations: Young, Gifted and Black. The ceremony honors students of all ages nominated by educators and celebrated in a festive evening event. But the key to the project is in documenting the young peoples' achievements through professional photographs and writing, this year by photographer Marquis Stoudamire and journalist Wade Nkrumah.

The Skanner News spoke with Young, Gifted and Black founder Reiko Williams about the program. Photos of the awards ceremony are by Katharine Kimball
Photography and are courtesy of Portland Public Schools.

The Skanner News: How long have you been doing this and why did you start it?

Reiko Williams: This is the fourth year of the program. I started it in response to overwhelmingly negative information -- internally and externally -- around Black students and their academic and personal progress. I was speaking with a woman and she challenged the idea that there were successful Black students in Portland. I was going to facilitate a workshop on Black student success and she said, "Are there Black students here that are successful?"

And I thought, if she and others think that way, and with persistent negative media stereotypes about Black students – it must be pervasive. I felt like the pervasive message is that Black students aren't faring well.

And so I conceived of a program where we can highlight student success.

TSN: So what do you do in the program then?

RW: We started four years ago, hired a professional writer and a professional photographer to interview students to capture their narrative and the photographer took pictures of the students. We held a program so teachers, staff and administrators nominated students and we chose the students and honored them. The program has grown from the first year when we honored 13 students. For the past two years, we have had more than 130 nominees every year but because of budgetary constraints we are able to recognize 25 of them although in our program. We recognized all the nominees and sent certificates of recognition to all the students nominated.

Twenty five of them get their stories told and their photograph taken by a professional photographer who goes out to the school, a professional writer captures their narrative, telling their individual stories. There's not one experience. We live in different households, with different families and different experiences. Young, Gifted and Black acknowledges the different ways our students show up. Success doesn't always look the same.

TSN: How can people support what you're doing?

RW: It's a one time event and we are trying to conceive of ways that we can continue the success of YGB. I just got off the phone with a parent before you called who is so excited she asked, "can I bring six or seven people? Am I limited in terms of the number of people?" It's not just the parent or the staff member who's excited about that student's success. There's a community around that student that they're celebrating and there are other students watching those students achieve success in different ways – it's not just the 4.0 student, not just a student having academic success but students who are interested in engineering, music or in art or athletics, achieving success in different ways. So how can people help? We are limited in terms of the number of students – and I wish that I could acknowledge all of the students.

TSN: What can people in the community do to support this work?

RW: I think what folks can do on a regular basis is to highlight student success, acknowledge the strengths the students possess, not to focus on their weaknesses or challenges. That's the problem our students have in our public education systems—they hear so much negativity. Portland Public Schools has a new initiative on a racial educational equity policy and plan. We're talking about the impact of race and racism and about the psychological trauma around racism that we don't talk about. This program inspired Si Se Puede which is a Latino student recognition program.

Although some people would rather not see race, the program acknowledges that we do, in fact, see race and it doesn't have to be a bad thing. There are assumptions about why people of color may not show up for school events – yet they show up in big numbers at events where we're celebrating student success. No parent wants to only be engaged in schools around negatives like you're kid isn't doing well, or they have discipline issues. We have been engaging with families around negatives and we want to change that conversation. There is institutional responsibility and accountability for the success or failure of any student. Also, there are lots of stories of success, nominated or not. How we view Black students, often based around stereotypical notions and assumptions, can adversely impact their success. Despite the societal and institutional obstacles they all face living in a racist society, Black students excel. The students acknowledged in this program represent thousands of other students like them. Unfortunately, various mediums on local and national levels convey a slanted picture of Black students. I want to set the record straight.

TSN: What is the most important thing for people to know about Young, Gifted and Black?

RW: I really want to focus on the larger societal issues that students face that hamper their success. If you're aware of the news and the reports in North and Northeast Portland about Black students, you often hear about gang affiliation or criminal activity – there seems to be an emphasis on that kind of reporting. I say folks are interested in hearing about student success. And our students need to see images of success, where they see they are part of a larger community where folks are doing great and wonderful things – they just don't talk about it, it doesn't seem newsworthy to the local media. I think the reason why we do it is because it's not understood in the public's mind. Folks are not ready to deal with race, there is so much discomfort around race.

A lot of folks had issue with the fact that we were saying Young, Gifted and Black. Whenever you talk about race, some people raise an eyebrow. But folks didn't have any issue identifying nominees, right? They had no problem identifying who the nominees were.