By The Skanner News
Published: 07 February 2007 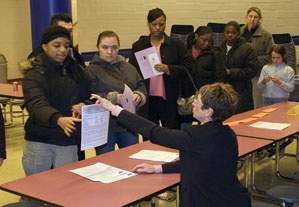 Prospective students and their parents line up Jan.
23 for information on the Jefferson High School
Young Women's Academy.

Portland Public Schools is opening both the Young Women's Academy academy and the Jefferson High School Young Men's Academy in September, in response to community interest and the proven success of single-gender schools. Both single-gender academies will open with sixth through ninth grades, adding a grade each year until they become grades six through 12 academies. Both are designed to boost student achievement through innovative, career-focused curriculum.
The Young Men's Academy will be located at Jefferson. The Young Women's Academy will be at Harriet Tubman Middle School in North Portland. Information sessions for the Young Women's Academy at Harriet Tubman will be held from 6:30 to 8:30 p.m. Wednesday, Feb. 27 at OMSI, 1945 S.E. Water Ave. (includes free planetarium show); and from 6:30 to 7:30 p.m. Thursday, March 8 at Harriet Tubman Middle School. An information session on the Young Men's Academy will be held from 6 to 7 p.m. Wednesday, March 7 at Jefferson High, 5210 N. Kerby Ave.
Students who wish to attend the two single-gender academies must turn in school choice applications by Feb. 17 for grade nine, and by March 23 for grades six through eight. All students living in the Jefferson High attendance area will be automatically accepted with an on-time school choice application.