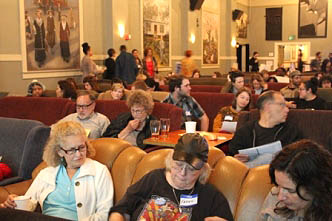 April's "Race Talks" discussion looked at the divisive issue of fluoridation. Portland City Council voted in favor of adding fluoride to the City's water supply last fall. But a campaign, named "Clean Water Portland," gathered 43,000 signatures in one month, enough to put the issue on the ballot this May. Voters will have an opportunity to vote for or against water fluoridation in the May 21 special election.
UPDATE: The City of Club of Portland has just released this report recommending  a YES vote on Ballot Measure 26-151.

Held April 9 at the Kennedy School in Northeast Portland, the event drew a crowd of around 100 people, many wearing buttons signaling where they stood on the fluoridation debate.

Organizer Donna Maxey asked the crowd to listen to each speaker without interruption, despite any strong feelings they had. Most people complied but the debate was sometimes punctuated with groans or derisive laughter.

Asked if they had changed their minds on the issue, at the end of the debate just four people raised their hands.

The next Race Talks discussion will tackle The Law and Racial/Ethnic Profiling, 7 p.m. May 14 at McMenamins Kennedy School, 5736 N.E. 33rd Ave.