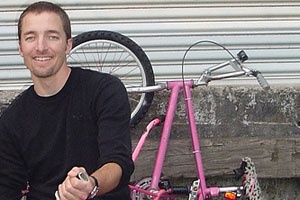 After years of hearing about accidents, assaults and injuries, cycling activist Jonathan Maus said one recent incident finally spurred him to action.
The incident in question involved an attack by three Black teenage girls on two White female bicyclists, which occurred Jan. 10 on North Williams Avenue near Legacy Hospital, when one of the teenagers kicked the back tire of Heather Moles, causing her to crash. Fellow rider Ashley Gorman tried to help, but, according to police reports, the assailants repeatedly struck both women. People standing at a nearby bus stop witnessed the ordeal.
The incident made it onto Maus' Web site, BikePortland. org. The bike activist says attacks on bicyclists are nothing new, but that this incident is different because it raises tender race issues in a part of town that has experienced rapid gentrification in recent years.
While it is unclear if the nature of the attack was indeed driven by the cyclists' race, Maus' blog and online discussion board have been alive with debate with more than 80 postings so far about the racial undertones in this incident. The online discussion also mentioned several other cyclists being attacked by teenagers in the North Portland area one with a pellet gun, another with fists.
Maus, a North Portland resident said that, instead of letting this incident become yet another forgotten assault, he wanted to create something positive out of it. Maus is now working with the city of Portland to create a neighborhood watch program that focuses on cyclists.
On Feb. 5, Maus met with North Precinct police commanders and representatives of the city's crime prevention offices to garner support for his community cycling watch proposal.
The effort has been called "a patrol," but Maus prefers the name "Bike Beat." His idea would add bicyclists to the area's already established neighborhood watch program.
Stephanie Reynolds, crime prevention manager for the Office of Neighborhood Involvement, says she thinks Maus' proposal could be a positive step forward. Reynolds will help Maus model his idea after the Community Foot Patrol program, which has about 12 active, non-confrontational foot patrol programs in the city.
Reynolds added that the success of Maus' idea depends on how the group operates.
"If it's too narrowly focused on the attacks, it'll miss the point," she said.
Officially, Portland police do not keep statistics related to bicycle assaults, said Sgt. Brian Schmautz, spokesman for the Portland Police Bureau. Police are aware of disputes and assaults on cyclists, but Schmautz said other officers have not identified a trend of targeted assaults.
As much as this issue is about cyclist and community safety, it's also about race – a sentiment echoed on Maus' cycling Web site. BikePortland.org's postings have been awash in discussion about racial tensions, perceptions and fears. While some postings specifically call for comment from the African American community, only a few voices from the Black community have responded. The comments run the gamut – from calling Maus and his Web site overtly racist, to thoughtful discussion about the impacts of gentrification.
Maus does not endorse the postings, he merely monitors them – and encourages civil discussion within his online community.
"It's really hard to talk about (race), being a White person," he said.
As much as Maus doesn't want to make race the issue, he admits the racial overtones of the attack moved him to take action. The thought of racial tensions brewing over in North Portland was unsettling, and Maus also wondered if cycling was somehow becoming a symbol of White gentrification.
"The population riding tends to be not as diverse as it could be," he said.
Maus is also quick to note that he doesn't want this to center on the Black community  in almost all the recent reported assaults the attackers have been teenagers.
As he begins a search for volunteers and a place to hold a community meeting in North Portland, Maus hopes a love of cycling will help unite North Portland's Black and White communities.
"This issue is bigger than some bike thing," he said.
For more information about the group go to www.BikePortland.org.