Kelly Moyer and Brian Stimson of The Skanner
Published: 07 February 2007 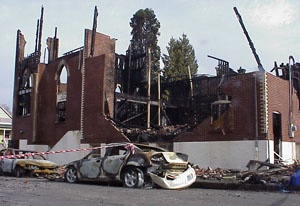 Neighbors in the heart of Northeast Portland watched with horror late Monday night as a four-alarm fire engulfed a beloved icon at the corner of Northeast Ivy Street and Russell Avenue.
By Tuesday morning, all that remained of the Morning Star Missionary Baptist Church were a few brick columns, some historical documents and, remarkably, copies of the Rev. Albert Wayne Johnson's sermons.
Residents who lived near the Baptist church called 9-1-1 just before midnight Monday, Feb. 5, to report an explosion that some callers said, "shook the house."
Firefighters arrived minutes later to a building so fully engulfed by flames that, according to the Portland Fire Department's report "embers were being lifted high in the air by the thermal column." Some of those embers actually fell on nearby houses. Two homes had roof damage and two cars on the scene were destroyed. No one was hurt in the fire.
Within one hour of the first report, the main body of the Morning Star Missionary Baptist Church had fallen.
By Wednesday afternoon, fire investigators had cordoned off the area and were taking down the jagged remains of the church's brick shell.
Lt. Allen Oswalt, spokesman for Portland Fire Department, said heavy equipment has been on scene throughout Wednesday to carefully and methodically remove the unsupported brick walls left by the fire.
He added that investigators don't want material to fall inside the building's remains as "that could hamper investigative efforts."
The Metro Arson Task Force, made up of investigators from the Portland Fire Department, Oregon State Police, and the Bureau of Alcohol, Tobacco and Firearms, is heading the investigation, and should be able to safely enter the church's remains on Thursday, Feb. 8.
Oswalt says investigators are keeping mum on the possible cause of the fire.
"If it was an arsonist, he and (the investigators) are the only ones knowing where that fire was set," Oswalt said.
Although the cause of the fire may be accidental, the incident sparked memories of last year's series of church arsons in Alabama.
Coincidentally, the first church to be demolished in that case also was a Morning Star Missionary Baptist church.
Johnson, senior pastor of the local Morning Star Missionary Baptist Church for the past 14 years, has said he intends to rebuild on the same site.
Johnson also hopes to hold services at 11 a.m. Sunday on site, possibly in tents.
The church was insured, but a catastrophic relief fund has been set up to help with the rebuilding efforts. To donate to the effort, contact any Portland area Wells Fargo Bank and mention the "Morning Star Missionary Baptist Church Relief Fund."