The Hope Kitchen Offers Soul Food for Your Health

By Helen Silvis of The Skanner News
Published: 28 March 2013

Collard greens, barbecue, tamale pie and spicy Southern-style soul food: cooked right it's not only good for your soul, it's good for your body too. Visit The Hope Kitchen, a food cart on Southwest 3rd and Washington in downtown Portland, and you can see for yourself.

You'll find delicious dishes so rich in flavor, you'd never guess they were made without red meat and the extra fat and salt that hurts your health.  (I took home some takeout, and my teenager, who usually runs away from health food, cleaned his plate.)

The Hope Kitchen was dreamed up by three sisters, LaRisha, Marsha and Michell Baker. Since their father died of colon cancer in 2008, at the age of 56, the sisters have been working to raise awareness about the disease and how to prevent it.

"We don't want anyone to have to go through what happened to our dad," says Marsha.

If you've been to just about any large community event in North and Northeast Portland, you probably have already met these sisters.  In 2009 they founded the Steve Baker Colorectal Cancer Alliance, and since then they have been taking leaflets and information into Portland's African American community at every possible opportunity. Their mission? To stop colon cancer by letting people know how easy it is to prevent and cure it.

"We try to get out here," says Michell. "It still feels like we're not doing enough."

The Hope Kitchen is a business, allowing Marsha and Michell to work full-time doing what they love and believe in – showing people just how good healthy food can be. Using their dad's special barbecue sauce recipe, and recipes they make at home, they opened the food cart and catering business last July.

At a recent event, people were doubtful they would enjoy healthy soul food, Marsha said.

Last week, the sisters were in Washington DC, attending  the "Fight Colorectal Cancer" conference and lobbying for changes to the law that will make it easier for people to get a colonoscopy.

"Getting a colonoscopy is really good way to prevent it (colorectal cancer). If you find a polyp, you can remove it and the risk is removed," says Michell.

You can prevent colon cancer by eating a nutritious diet high in fruit, vegetables and fiber, getting exercise and cutting back on bad habits like smoking and drinking. And it's also important to get screened for any danger signs. Two screening tests are used, with colonoscopies recommended for African Americans starting at age 45. Everyone else should get screened by age 50.

Sponsored by Pennsylvania Rep. Charlie Dent, the bill (HB1070) the sisters were in DC to support would remove Medicare co-payments – sometimes as large as 25 percent –for people who have colonoscopies. Congress has already passed legislation to remove these co-payments for private insurance. But before they did, a person who had a colonoscopy that resulted in a positive finding, could be charged a lot more than if it was negative. It also increased the cost for those patients of later colonoscopies.

It's important because colon cancer is the second leading cause of cancer deaths in the United States. And African American men and women are more likely than others to get the disease and also to die from it.  Still most people don't get the screenings they need.

The sisters also asked Rep. Bonamici and other legislators to support more funding for research, to continue and expand screening and awareness efforts, and to name March National Colorectal Cancer Awareness month.

"Gov. Kitzhaber signed that for Oregon, but we'd like it to be national," says Michell. 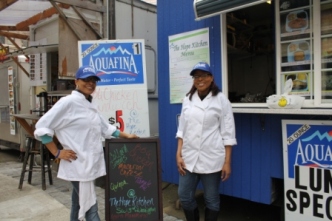 "As a family we're definitely proud of her," says Marsha. "And as an organization we are hopeful that the word is starting to get out there. We hope people won't run in the other direction when they hear the words colon cancer. They'll listen and get tested."