Unseen. Invisible. Underreported. These are just a few of the words Meghann Darne uses to describe the homeless youth problem in North Portland.
To say the problem of homeless youth is invisible would be a joke to some; so-called "street kids" crowd the sidewalks downtown, begging for change and causing some in government to call for laws further restricting vagrancy.
But the problem is much different in North and Northeast Portland, said Darne, a youth advocate at Portland OIC, an alternative school providing education, leadership and job training to at-risk youth ages 12 to 24.
"The exact number of homeless youth is unknown," she said. "Many don't even qualify themselves as homeless."
Darne, a foster parent herself, is working on the Housing Opportunities Matched with Education (or HOME) project to establish a youth homeless shelter in the North Portland area. The Portland city Bureau of Housing and Community Development awarded a grant of $12,000 (with a matching $12,000 from POIC) to research the possible need for such a shelter in the area. To record her research and to help her obtain future grants, Darne filmed a documentary about the project with the help of Cervantes Jimenez of SinImage, an independent film company. During the filming of the documentary, titled "Unseen: A HOME project," Darne interviewed both juveniles and social service providers to find out the scope, age range and culture of the homeless youth in the area. A screening of the film is tentatively scheduled for March.
Unfortunately, Darne's research confirmed her suspicions — there is a number of youth in North and Northeast Portland without a permanent roof over their heads. 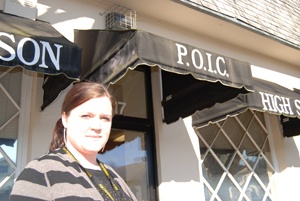 Darne began her research by talking to several homeless youth she assisted at the POIC. She talked with their friends who were in similar situations, and after interviewing social service providers about the plight of homeless youth in the area, the size of the problem began to manifest itself.
What she found was disheartening. Many homeless youth were previously in foster care and fell through the cracks. According to the Department of Human Services, of the 273 foster children ages 13 and older at the North/Northeast branch, 28 are listed as runaways; an additional six children younger than 13 are also listed as runaways. But many also come from broken homes or situations unique to each person.
Kamille Irwin, prevention services supervisor at House of Umoja, a youth social services agency, says one of the reasons it has taken so long for someone to address this problem is the Black cultural barrier.
"It's not talked about in African American culture," said Irwin, whose organization provides employment and mentoring advice to youth. "People are proud. It's not as visible, but it is a problem."
According to Darne and the youth she interviewed, youth homeless culture in these neighborhoods is quite different than the culture that seems to thrive downtown. The availability of extended family and friends keep most of these youth jumping from couch to couch instead of from shelter to shelter.
Anthony Jordan, area director for Portland Central Young Life, a non-denominational Christian outreach organization, said the problem of youth homelessness in North Portland is almost more prevalent than the "street kid" culture of downtown – it's just not as visible. These youth can go from best friend to uncle to grandma to a girlfriend in order to find a place to stay.
"They have many homes," said Jordan, whose organization reaches out to youth who only have "a place to lay their heads."
But one teen who was forced to live at the graciousness of others for four months, noted that it's not a healthy environment.
"It pretty much sucked," said Kameron Kulby, 17. "I couldn't pay attention at school."
Kulby, who was interviewed for the documentary, said an eviction caused his homelessness when he was just 16. After that, he relied on the goodwill of friends to provide temporary shelter, a bite to eat and a shower.
"It strengthened friendships," he said about his ordeal, and added that, if it weren't for his friends, he would have had no place to stay.
As for money, Kulby said there was none. Panhandling was difficult, and save for the downtown shelters, there were scant resources in North Portland.
"I don't like downtown; bad things happen downtown," he said, reflecting the belief among North Portland youth that the "street kids" there engage in a different kind of homeless culture.

Now that she has established a need for the shelter, Darne hopes her documentary will be able to help her secure grants from public and private entities to create a transitional housing program for youth. She hopes to create a youth-run home (under adult supervision) that would house eight to 10 individuals. Capable youth would be required to pay rent, although the rent would be transferred to a savings account that would help them after their time at the home was up (which, depending on the individual could be up to 18 months). She estimates the home would cost $300,000 a year to run.
Many details about the group home have yet to be established, although the residents would receive training in life skills and have a case manager to help them. The structure of the home would be based off a youth development model that emphasizes youths' strengths instead of their weaknesses.
Both Jordan and Irwin call the proposed home a good start that could serve to foster more services catered to this underserved community. Irwin said her organization is also planning on opening a youth shelter and restarting its after-school program soon. That shelter, unlike Darne's proposed youth home, would serve youths on mandate from the courts or DHS.
While Kulby said he is now living with his father, the group home – if located in North Portland – would have met his needs at the time of his homelessness. He attends the Youth Employment Institute and is on his way to gaining his GED. He hopes to one day own an auto body repair shop.