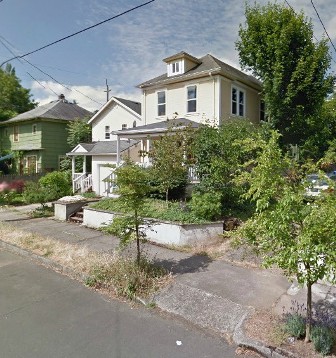 First Nicholas Johnson lost his sight to glaucoma. Then he almost lost his family home. But thanks to a Multnomah County policy that donates some tax-foreclosed property to the nonprofit Community Vision Inc., Johnson and his mother have been able to stay in their home.

"I'd done a lot of work on it, and it has sentimental value," Johnson says. "It's not that the building itself is sacred. But it's a gathering place for our family. We'd always been in this home, and there have been a lot of good moments here – as well as sad moments."

On March 27, Multnomah County will auction about 25 properties in foreclosure because of their tax bill. The county doesn't foreclose lightly. It waits six years. But in cases such as Johnson's— when the home is occupied by a resident with a disability -- the county has taken a new approach. It donates the property to disability nonprofit Community Visions, which then works with residents to find new housing or keep them in their homes.

"They move in pretty quickly to restore the property," says Multnomah County assessor Randy Walruff. "They also take care of the occupants. So in the end it's a win-win for everyone – for the county, for the neighborhood and for the person who is foreclosed on."

Walruff hit upon the idea after looking at the finances involved and realizing that the benefits of donating the properties probably outweighed the costs.  Multnomah County Commissioners reviewed the data and agreed.

"If properties are occupied there is a cost related to evicting a person," Walruff says. "That's a dollar cost as well as social costs. Typically the properties are in very, very bad shape. They have many years of deferred maintenance, and city liens for a variety of reasons. The value of the properties is sometimes greatly depleted."

For example, he says, "One property that's not in our inventory but has potential to come into our inventory, has city liens for well over $100,000 and to date owes $12,000 in taxes."

The city drops its liens when the properties are donated. Disability nonprofit Community Vision takes possession, rehabilitates the property and makes sure the residents are housed. Most move to alternative housing. But under the agreement, the property must be kept as affordable housing for at least 30 years.

"Once the home is sold it goes back on the tax roll and they return at a much higher tax rate," Walruff says. "So when all that is totaled, there's a much greater benefit to donate the property."

Walruff stresses that the donations are not a program, but just a better choice in the small number of cases where people with disabilities are still living in the foreclosed property.

So how did Johnson's home on Northeast Jessup Street end up in foreclosure? Built in 1960 with insurance money that came from a road accident that killed Johnson's grandfather, Arthur Cox, and injured his grandmother Etolia Cox, Johnson's mother inherited the home. But by 2006, she had lost her sight and become mentally disabled.

A payee appointed to manage her finances stole her disability checks, drained her bank account, and sold off a second family home, putting the proceeds – $145,000 – into her own pocket. The thief was prosecuted and convicted of embezzlement, but the family couldn't recover the money.

Johnson was left to deal with a huge tax bill and a mountain of repairs.

"I was in Salem at the time at the blind school," Johnson said. "I was learning Braille and how to cope with being blind."

Unable to continue his work as an accountant, Johnson sank $13,000 -- his entire savings -- into paying off part of the unpaid tax bill. He also tried to make repairs. But the bills kept mounting. In August 2010, Multnomah County finally foreclosed.

"I was so upset I didn't even go down there, so I just prayed and asked God for help," he says. "I'd done all I could do."

Help came in the form of Portland Disability Commissioner Amy Anderson, who knew Johnson's story.  She spoke to county commissioners, and they decided the home should become one of the handful of properties donated to Community Vision. The nonprofit helps people with disabilities live independently, work and find affordable housing.

It also works to help people with disabilities build financial stability and buy homes – long out of reach for most people facing these challenges.

Today thanks to the program, Nicholas Johnson and his ailing mother – he takes care of her — are still able to live in their family home. And the nonprofit is working with Johnson to build financial security.

"The goal is to buy the home back," Johnson says. "That's the goal."

For more info on Community Vision, go to www.cvision.org.