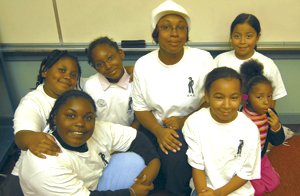 Chakila Scott-Riley leads the nonprofit organization Sisters Having to Exceed, a program designed to provide King Elementary School girls in the third and fourth grades with positive role models. Scott-Riley meets with groups of between two and 10 students in a classroom once a week after school for an hour each time. Scott-Riley was honored with a 2006 Outstanding PGE Volunteer Youth Mentoring Award in recognition for her volunteer activities. Some of those she has mentored are, from left: Gabrielle, Earnisha, Shacura, Eurre, Marina and Sharayah.

North Portland resident Chakila Scott-Riley received the 2006 Outstanding PGE Volunteer Youth Mentoring Award for her creation of a youth empowerment program at King Elementary School in Northeast Portland.
When Scott-Riley, a PGE customer service representative, realized that King Elementary School students needed positive role models, she talked to school officials and launched a program she dubbed Sisters Having to Exceed (S.H.E.).
Targeted at girls in third and fourth grades, each three-month session of S.H.E. involves groups of between two and 10 youngsters meeting in a classroom once a week after school for an hour each time. Scott-Riley encourages the "young ladies," as she calls them, to try new experiences.
Together, they share their concerns and discuss the importance of such things as exercise, eating healthfully and talking respectfully to their parents and other adults.
"Chakila has been an amazing presence at King," said Tree Davis, manager of King's Schools Uniting Neighborhoods program. "Chakila focuses on preventing the circumstances that are barriers to young women in general and specifically to young women of color coming from economically disadvantaged backgrounds. I have been awed and impressed by all she has done here."
Scott-Riley has recruited other volunteers to help her reach out to still more girls who need a mentor. The program's third year began this fall, and she plans to expand it to include older girls at nearby Ockley Green Middle School.
"It is so rewarding," said Scott-Riley, who's hailed in King's halls as "Ms. S.H.E." "I can see them becoming more mature, more aware of what's going on around them. And their behavior has changed. I believe they have more respect for themselves. With someone to listen to them, they feel like their voices really do count."
Michelle Guinn from PGE's business services department, who nominated her co-worker for the award, said she was impressed by Scott-Riley because she "has decided that she is her sisters' keeper."
"Instead of just harping about the problem, she became part of the solution," Guinn said. "For some of these girls, Chakila is the first positive female role model they know personally. She teaches them to always give 100 percent and that what you put into something is what you get out of it."
In recognition of Scott-Riley's award, PGE donated a $500 Outstanding Volunteer Grant in her name to Second Chance at Life Inc., a nonprofit organization dedicated to helping develop inner-city youth and low-income families in the Portland area.
In the Outstanding Volunteer Award program's fourth year, PGE employees and community leaders nominated more than 100 individuals for the award, including co-workers, retirees and colleagues who embody the values of volunteerism.
During 2006, PGE volunteers logged about 90,000 hours with their favorite nonprofit organizations. The selection committee, composed of PGE staff members and local nonprofit executives, chose the Outstanding Volunteers. Awards are presented once a year. Community members are invited to nominate individuals for this award. Nomination forms may be found at www.portlandgeneral.com/nominate.