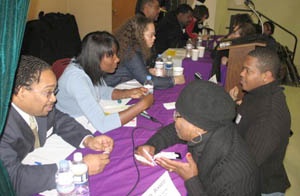 Those attending the Media Access Workshop last Saturday talk to journalists about how to interest the media in their stories. Several journalists participated in a panel discussion, including, from left, Chris B. Bennett, co-publisher/editor, of The Seattle Medium; Lornet Turnbull reporter, The Seattle Times; and Phyllis Fletcher, reporter, KUOW Radio. The Seattle Association of Black Journalists sponsored the workshop.

Seattle organizations with stories to tell learned how to do just that during the Media Access Workshop held by the Seattle Association of Black Journalists on Saturday.
"What happened today was awesome, and I hope they keep doing it because this is what we need: to understand how we can communicate and get stories that we want out," said community member Fred Montgomery.
It was standing room only as the seats were filled with representatives from organizations that foster children, advocate for the arts and help people learn about their heritage.
The idea behind the workshop was to put the community in touch with its local media.
"I believe there is always room to have more people of color in the media, featured in stories on TV, radio and in print. We have stories to tell," said Lisa Youngblood Hall, King 5 television producer, president of the Black journalists association and a panelist at the workshop.
"People have walked away with a lot of information on how to pitch a story and what makes a good story," Youngblood Hall added.
The first segment of the workshop explained how to get news coverage for the audience's events and how to know what makes something newsworthy. It was led by panelists Chris Bennett Jr., co-publisher/editor of The Seattle Medium; Phyllis Fletcher, reporter for KUOW radio; George Griffin, CEO and president of G3 & Associates; Angela King, reporter for KCPQ-TV; and Lornet Turnbull, reporter for The Seattle Times.
"Grab us and keep us," King told the audience.
The panelists, from various media outlets including TV, print and radio, answered questions about what goes on inside the media.
"They want to help you get your story out there," Montgomery said. "My story counts."
Those attending the workshop learned that people love puppies and cute kids, but what really makes the story is the substance, the impact on the audience and the larger community.
"I didn't totally understand the concept prior to this workshop," said workshop participant Portionte Floes, "and now I kind of get what they're (the media) looking for as far as the meat of the story."
The crowd listened intensely and busily scribbled notes while questioning the journalists about their trade.
"There was a lot of back-and-forth between the panelists  and the audience, so I think everybody got a lot out of it," said Jerry Large, columnist for The Seattle Times and vice president of print for the journalists association.
During the break, the stage was crowded with audience members, who spoke one-on-one with the panelists.
"The opportunity to actually meet and greet Lisa Youngblood Hall and get a business contact for Colors NW Magazine was very helpful," Floes said.
The panel also spoke to people who said they felt ignored by the media because of race.
"There are going to be people who feel so passionately about their stories that they might be offended if it doesn't make it on, and that's unfortunate, but that's the way it goes sometimes," said Youngblood Hall. "There are thousands of stories, and if the story is important enough, if there's enough time and it's a good story, we're going to try and run it."
Panelists for the second part of the workshop were Monica Foster, office manager and reporter for The Skanner; Robert Jeffery Jr., publisher, Colors NW Magazine; Jerry Large, columnist, The Seattle Times; Connie Thompson, anchor, KOMO-TV; and Youngblood Hall. In this segment, the media's perspective was relayed to the community.
"It helped you understand their deadline issues and how to find the reporter that would be relative to your topic," Floes said.
Youngblood Hall said the Seattle Association of Black Journalists would check out some of the organizations to determine if there are stories to tell.
"We need to do more; we need to figure out a way to grow the relationships we've formed today," she said.
Large said he brought a "whole stack of contact information" away from the discussion. He wasn't the only one.
"It was almost as if I went to college and learned a trade, and now I know how to apply it by getting media coverage for my events," Floes said. "I walked away with the opportunity to get my story told."
For more information about the Seattle Association of Black Journalist, visit sabjonline.org.