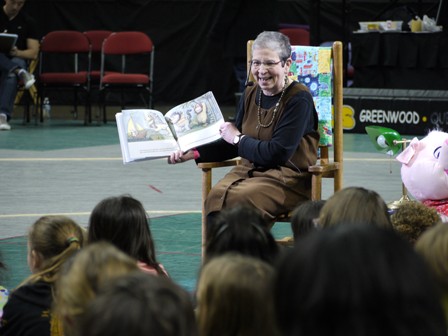 Seattle's legendary Rat City Rollergirls teamed up with the charity First Book on Feb. 9 to raise funds for the organization, which distributes books to children from families in need.

Each of the four teams competing chose a favorite children's book to represent them in the game-day event. Buckets were then passed around the stands, with fans able to donate money toward their team's book.

The four books contending were "The Monster at the End of this Book," "Cloudy with a Chance of Meatballs," "Where the Wild Things Are," and "Alexander and the Terrible, Horrible, Very Bad Day."

"Where the Wild Things Are," nominated by team Derby Liberation Front, received the most donations and was read by Pearl during halftime in a mock living room set up on the derby floor.

Two classes of first graders from Sand Point Elementary School were in attendance and gathered around for the book reading. It was the first time kids had been invited down to the derby floor.

Instead, many of the audience's adult members came down and joined the children at the book reading, totaling around 100 people altogether.

"Our fans were delighted with the creativity involved," Jessica Ivey of Rat City Rollergirls said.

Over $2,000 was raised at the event and went entirely to First Book Seattle, including $500 directly from the Rat City Rollergirls.

The money will go toward purchasing more than 700 books for local children.

The lasting impact of the partnership at Key Arena, Lehman said, was the sense of possibility felt that night, from "the kids in attendance who heard a full stadium cheering for their right to read," to "the volunteers carrying heavy buckets filled with change," to "the amazing Rollergirls who reminded us what's so fun, and hard core, about reading."

First Book Seattle works with Title I schools in King County to provide new, high-quality books to children who might not otherwise have access to them. Schools fall in the Title I category if a large number of their students are low-income and require additional academic resources.

"We fight for every child to have their own bag of books, and to find their own first book that they love," said Lehman.

The event at Key Arena wasn't the first time Rat City Rollergirls have been involved with the education-promoting organization.

Several of the Rollergirls have made appearances in Seattle elementary schools, educating children about the emerging sport of roller derby and the importance of fitness, as well as reading.

"They're a strong organization to collaborate with, and it benefits everybody," said Ivey, of First Book.

"We wanted to bring visibility to them."

The Rat City Rollergirls collaborate with a charity at every bout (the roller derby equivalent of a game).

Their next partnership will be at Key Arena on March 16 with the Girl Scouts of America.