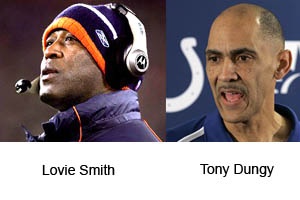 CHICAGO — It took 41 years for a Black head coach to make it all the way to the Super Bowl.
Lovie Smith did it Sunday on a snowy afternoon in Chicago. Four hours later, his good pal and mentor Tony Dungy joined him. Not one, but two Black coaches meeting in the nation's biggest sporting spectacle.
It's historic. And it's about time.
"It means a lot," Dungy said after his Indianapolis Colts beat New England 38-34 in the AFC title game. "I'm very proud of Lovie."
And Smith equally so of Dungy.
"We have to play someone and, in my perfect world, I would like to see the Colts be that team," Smith said after his Chicago Bears pummeled the New Orleans Saints 39-14.
It wasn't all that long ago that the NFL's best jobs were off-limits to Blacks. Never mind that three-quarters of the league's rosters were filled with Black players, or that there were qualified Black assistants. When the time came to hire a new coach, they were passed over — time and again.
Meanwhile, White coaches who had done little to distinguish themselves in their previous jobs got additional chances. It was the old boys' network at its worst.
Art Shell and Dennis Green paved the way in the modern era and Dungy took it a step further. Low key and humble, he would never be the type to grandstand and bluster about injustice. But he was honest about the league's inequalities and knew that his success would go a long way in opening doors for others.
One of those would be Smith, Dungy's protege in Tampa Bay. He, too, led by example.
When the Bears and Colts take the field in Miami on Feb. 4, men of color who dream of being in the center on the grandest stages will see that the door has been blown wide open. Men of color who have been held back, told in words or deeds that they weren't good enough, will have not one, but two role models.
"Being the first Black coach to lead this team, of course our players knew about it and they wanted to help us make history," Smith said.
I'll feel even better to be the first Black coach to hold up the world championship trophy."
If he doesn't, at least he'll have the consolation of knowing Dungy will.
Whether he wanted to be or not, Dungy has long been the standard bearer for minority coaches. He was just 25 when he became the NFL's youngest assistant, taking a job on Chuck Noll's Pittsburgh staff. Three years later, he was the defensive coordinator and the odds-on favorite to advance.
Smith's odyssey was equally bumpy: Tulsa, Wisconsin, Ohio State, Tampa Bay, St. Louis. Those were only a few of the stops he made in his 20-year journey to become a head coach.
"I'm happy for both coaches," Colts defensive end Dwight Freeney said. "I hope we get to the point we don't have to hear about it."
The day when a coach's skin is no longer an issue isn't here yet. But by making history together, Smith and Dungy have brought it a little closer.
—The Associated Press