Multnomah County: Kids, Guns, a Lawsuit and a Green Sheriff

By Helen Silvis of The Skanner News
Published: 01 February 2013 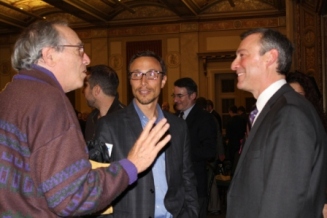 Multnomah County Chair Jeff Cogen delivered an upbeat State of the County speech Feb. 1 at the City Club of Portland's Friday Forum at the Governor Hotel in downtown Portland.  He started by thanking a host  of colleagues, partners, and the county's 4,500 staff.

"These are people who are giving back each and every day, and we owe them our gratitude and support," he said.

And  he made the county commissioners present stand to applause, saying they were "known for getting things done."

Talking with just a couple of note cards, Cogen said the perception that government can't make our lives and communities better is false and damaging.

"That allegation, which has festered and grown in our country, has led to tremendous cynicism  and mistrust because it says there is no way to improve our community. We need to battle that perception, by showing inspirational examples of government making a difference." 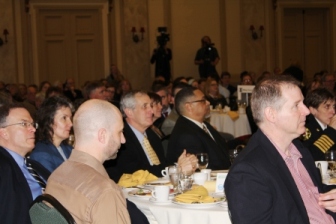 Sucesses
Cogen said the county's greatest successes, the Gateway Domestic Violence Safety Center and the Mental Health Crisis Center, both have been a result of partnerships.

He went on to list the county's biggest initiatives during the past year, and gave details of cost-cutting efforts that staff had used to make the county's annual $1 to $1.5 billion budget go further.

The James Beard Food Market will open on the East side of the Morrison  Bridge, on land sold this year to the market's organizers and backers.  That will give Portland an all-year market  for local produce and put the building back on the tax rolls, he said.

The East County Courthouse has been completed and is open for business.

The Sellwood Bridge, overdue for replacement 90 years ago, will soon be the only bridge over the Willamette designed to stay put in an earthquake.

Sheriff Dan Staton has made Multnomah County jail a model of sustainability, and cut costs by half a million dollars, earning himself the nickname, The Green Sheriff. 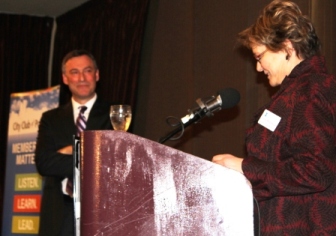 The Department of Community Justice under its director, Scott Taylor, launched an effort to bring the best evidence-based practices into parole and probation services, Cogen said. And what the evidence says is that long jail stays for parole violations don't reduce rearrests. In fact, they can make people worse.

"What really matters the most is not the length of the stay, it's that the sanctions should be swift and certain," he said.

As a result, community corrections staff reduced the length of stay for violators from 19 to 15 days.

"Parole and probation are now using 150 fewer beds than before, which is saving us millions of dollars," Cogen said. "What we've found is not only that we are saving money, but the rearrest rate has dropped 20 percent." 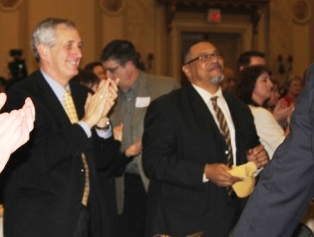 Asked later about Wapato, the empty jail that was built for a jail population  that never materialized, Cogen noted that with the drop in crime rates, it is not needed. Efforts to find a use for the building are now focused on either a secure Alcohol and Drug treatment facility or as a re-entry program for prisoners returning to the community.

In our fifth year of slow recovery from recession, hunger remains a serious problem in Oregon, Cogen said. What's worse, the more people are suffering, the less money the county has to help them.  Setting out to do more with less, the County has developed innovative ways to help feed children and families, he said.

"A lot of low-income kids, the only regular meals they get are the breakfast and lunch they get at school."

The county added a supper program, so students don't go home hungry, a backpack food program, for weekends, and summer food programs, through partnerships with the Oregon Food Bank, and the City of Portland.

"If you've got hungry kids, what have you got behind them? Hungry families," Cogen said. "So this was a way to deliver hundreds of thousands of meals to hungry kids in our community, piggybacking off resources we already had in place." 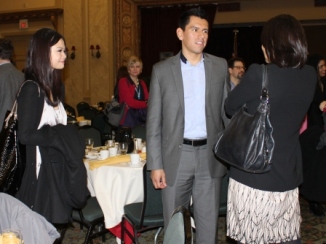 Food From the Farm

Another innovative food program is the County's Crops Farm in Troutdale. The farm grows produce for the Snow-Cap food bank in East Portland, providing half of all the fresh food distributed there.  The farm is training new farmers, which is important because Oregon's farmers are aging, and it also sets aside half an acre where juvenile offenders can grow crops. The crops are sold and the proceeds go to victim restitution.

Out Front in Health Care

In health care the county has been a leader in prevention initiatives. So instead of paying to treat people in health crises, community health workers support people to stay healthy.

Multnomah County was one of the first places in the nation to require fast food restaurants to list the nutrition value of meals. Soon that will become a national requirement, Cogen said.

"I feel very positive that Multnomah County is absolutely on the cutting edge nationally," he said.

Cogen also said he was ready to seek changes in state law to increase the cigarette tax, because higher costs are one of the best ways to prevent children from smoking. "We have a responsibility if we want excellence," Cogen said. "Let's use the library as an inspiration to restore excellence in public services in Oregon.

Foreclosures and a Lawsuit

Foreclosures have put 100s of county residents out of their homes, and made many people homeless, Cogen said. And while state law makes it impossible for the sheriffs to refuse to evict people, the county is ready to challenge some of these laws.

In fact, the county already has initiated a lawsuit against the controversial Mortgage Electronic Registration System, usually known as MERS. During the housing bubble, banks began using  MERS to exchange property that had been chopped up bundled and packaged with other properties, as investment tool. The move has made it almost impossible for homeowners to find out who owns their mortgage.

"Millions of dollars, maybe multimillions it's hard to tell – that the public is owed have not been paid," he said. "Our entire property system has been under assault."

The county has initiated a lawsuit against MERS that has yet to be decided. Cogen also took on the issue of gun violence. Condemning the NRA for blocking gun control efforts, he said the Second Amendment is like all constitutional rights: it's not absolute. Just as you can't shout fire in a crowded theater, gun owners should not be able to menace citizens.

Cogen cited the two "yahoos" who recently walked around Sellwood with loaded assault weapons. Sixty people called 911, he said, a school went into lockdown and people were terrified.

"To me this is practically terrorism," Cogen said. "The Second Amendment does not give the right to terrorize your neighbors, and give kids nightmares. I believe this was an act of criminal menacing."

Finally he spoke about efforts to improve mental health care, including the introduction of a Mental Health First Aid training program for first responders, but also the general public. That program will train people in how to recognize and help people with mental illness. But Cogen acknowledge that lack of resources is holding the county back from having adequate community services for mentally ill people. "The truth of the matter is we're farther away now from where we should be than we were two years ago."