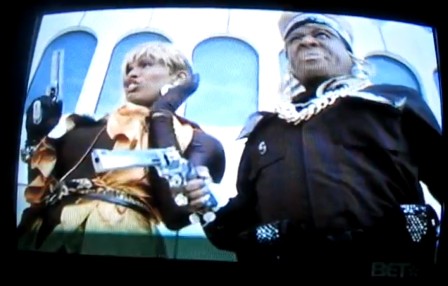 A Pennsylvania man indicted in Oregon for a scheme to defraud the Catholic Church is the same inmate who filed suit two years ago against Jamie Foxx and Tyler Perry for stealing his idea for the never-released film "Skank Robbers."

Shamont Sapp, 49, currently incarcerated in Pennsylvania, was indicted yesterday by a federal grand jury and charged with mail fraud in a five-year scheme to pursue false claims of child sex abuse by Catholic priests in four Oregon dioceses.

The defendant launched his lawsuits as well as his claims of sex abuse from behind bars.

"Sapp, originally from Harrisburg, Penn., is alleged to have used 'legal mail' while an inmate of the U.S. Bureau of Prisons to file, pursue and litigate the false claims in federal courts from 2005 through 2010," said the Oregon Department of Justice in a release Tuesday.

Meanwhile, Sapp first filed suit against Foxx and Perry for $1 million each, plus Peter Zuckerman and Fox Broadcast for $4 million in 2011; the case was refiled in January of 2012.

The celebrity scandal website TMZ reported in late 2011 that Sapp "claims that he gave the two actors the idea to reprise their roles Wanda (from 'In Living Color') and Madea (from Perry's various films) along with Martin Lawrence's Sheneneh (from 'Martin') for a drama based around a mental hospital."

But TMZ also reported that Foxx and Martin had essentially performed the concept on the BET Awards weeks before Sapp says he came up with the idea.

It's unclear how Sapp claims the actors got the idea from him; however, as a convicted bankrobber himself, he could claim knowledge of the subject matter.

The spokeswoman for the Oregon DOJ said this week that Sapp is charged with filing fake abuse claims that "alleged similar sexual assaults by specified priests when Sapp was a minor in 1978-79."

All told, the DOJ says Sapp filed claims against dioceses in Tucson, Ariz.; Covington, Ken., and Spokane, Wash. – in some instances alleging sexual acts that took place in the same cities on the same day.

Federal officials are seeking to have Sapp brought from Pennsylvania to Oregon to face charges.

If convicted of mail fraud, Sapp faces a maximum sentence of 20 years in prison and a fine of $250,000, as well as mandatory restitution for all damages incurred.