Media Teach Tricks of Their Own Trade 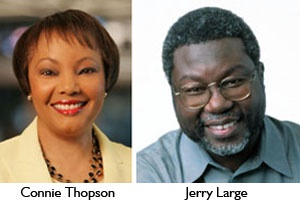 Looking for a way to get positive media coverage for your business or organization?
Then join some of Seattle's most prominent reporters and editors for a media access workshop from  8:30 a.m. to noon Saturday, Jan. 20, at Grace United Methodist Church, 702 30th Ave. South, Seattle.
The Seattle chapter of the National Association of Black Journalists will conduct the free workshop to show community organizations and businesses techniques for creating and writing press releases, contacting the media and understanding how editorial decisions are made in local newsrooms.
"This workshop will help put people in touch with reporters, editors and producers from print, radio and television media and allow for lively discussion on how the media chooses its stories," said Lisa Youngblood Hall, association president and a producer at KING 5 TV.
Other panelists for the workshop include: Phyllis Fletcher, reporter for KUOW Radio; Angela King, reporter for KCPQ-TV; Lornet Turnbull, reporter for The Seattle Times; George Griffin, president and CEO of G3 & Associates; Essex Porter, reporter for KIRO TV; Jerry Large, columnist for The Seattle Times, and COnnnie Thompson, anchor for KOMO-TV.
"It's necessary to be involved in the telling of your story. If you don't engage with the media, your stories may not be told, or they may be told in ways that don't match your perspective," Large said.
A common belief shared by many African Americans is that media coverage of African American events or issues is presented in a biased manner. "Black people haven't always trusted media to get it right, or to care about the same things Black people care about. That's why it's important to be involved with the media," Large added.
The workshop will be composed of two segments: "The Nuts and Bolts of Getting Media Coverage" and "The Media's Perspective on Getting News Coverage."
The "nuts and bolts" is the starting point of the workshop, where writing a news release and learning practical methods for appealing to the media are acquired. Participants will gather awareness about how the media picks and chooses which stories to cover from panelist leading the "media's perspective" segment.
"We are very happy to be able to offer this opportunity to the many hard-working organizations in our area and are grateful to the sponsors who helped make it possible," Hall said. "It is part of our association's mission to be community-minded through public service, to help the public understand the news process and to assist them in telling their own stories."
The Seattle chapter of the National Association of Black Journalists is an affiliate chapter of the National Association of Black Journalists, a group of more than 3,000 African Americans working in the media. It is an organization for journalists, student journalists, journalism professors and advertising and public relations professionals.
One of the largest and oldest media groups in the Northwest, the association is also a founding member of the Northwest Journalist of Color, a coalition of ethnic journalism groups located in the region.
This is a free event; however pre-registration is required by visiting www.sabjonline.org. For more information call 206-368-4033.