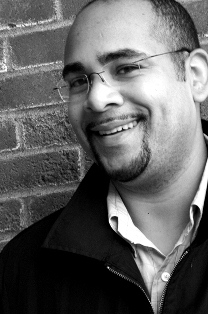 Coming out of college, Brian J. Carter dreamed of starting a museum in the Northwest focused on the African American experience.

The 33-year-old Carter was recently named Director of Museum Services and Education for the Oregon Historical Society. He is excited to bring his message of community driven exhibit creation to the society.

His love of history began as a young, curious child in Yakima, WA. In order to feed his son's curiosity, Carter's father would take him to the local library. During these library visits, Carter would ask him about lesser known Black historical figures and specifically inquire about Black people who made history in Washington. Once they decided on a figure, the two would find books on him/her and read them together.

Carter says he carried this with him throughout his life.

He graduated from Stanford University in 2001, where he majored in history with a focus on slaves in the U.S. south. Following that, he received his Masters in museum studies at University of Washington in 2006.

While at Stanford, Carter got the opportunity to work on the King Papers Project, a large-scale research venture focused on Dr. Martin Luther King Jr., headed by Dr. Clayborne Carson. Carter says the experience cemented his love for history.

The Project's principal mission is to publish a "definitive" fourteen-volume edition of King's works, including correspondence, sermons, speeches, published writings, and unpublished manuscripts.

It also engages in educational activities aimed at youth and diverse audiences.

During his first year at UW, his dream became a reality when he got involved with the Northwest African American Museum.

It is the only museum that focuses on the Black experience in the Northwest. Carter was one of the founding members. He started as a volunteer, became an intern, and then an education director. Currently, he's the deputy director and head curator for the museum.

He will continue to serve in this role until Mar. 4, his first day with the Oregon Historical Society.

"For the historian, that means you're doing your job," he says. "You're reflecting the stories that happened both on top, on bottom, from the side. You're taking a long term view at events and viewing from different perspectives."

One of the first things Carter wants to do is get people from around the state together in small groups (around 10 people) and do a community survey. Attendees would be asked about their impressions of the Oregon Historical Society, how they use the tool and what improvements can be made. Carter says the goal is to chart a course forward that meets the needs of the state.

"With the changing demographics, not just in Oregon but nationally, you've got to be cognizant of the fact of that the people coming into your museum may be different now than they were 50-100 years ago," he says. "For museums to succeed and grow and to be as truthful and honest as they can be, they need to acknowledge that work to fill the truth in. Part of that is to see a reflection of yourself in the museum and to see your stories told."