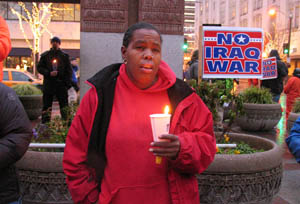 Activist KL Shannon joined at least 100 others at a peaceful protest against the Iraq War Jan. 1 following the death of the 3,000th member of the United States military to be killed since the beginning of the war. Organized by the Veterans for Peace, the protest, called a "die-in" at Westlake Center, included a 30-minute silent action in memory of those killed in the war.