By Helen Silvis of The Skanner News
Published: 17 January 2013

Courtroom 228 in Portland's downtown courthouse was full at 11 a.m. Thursday, Jan 17. Family and friends of Yashanee Vaughn, killed March 19, 2011, when she was just 14, had arrived in force for the final court appearance of Parrish Bennette, 17, the teen who shot her.

What they were not prepared for was the final statement from Defense Attorney Thomas MacNair, who told the court that it was the defense legal team, and not Parrish Bennette, who had decided to withhold the location of the dead girl's body for four months. Attorneys said the decision was based on their duty to provide the best defense possible for the youth.

"We want the Vaughn family to accept our sympathy and our regret for the additional pain that the family had to endure because of that decision," he said.

Vaughn's mother, Shaquita Louis, left the courtroom in tears at that moment.  McNair's words were lost to many of those in attendance, among the gasps and sighs of shock and dismay.

Outside the courtroom, Louis told the press the revelation had reopened all her old wounds.

"I didn't get to bury my daughter like she should have been buried, and them knowing where she was," Louis said. "This was the first time I ever heard of it."

Other family members also expressed anger at the Defense team.

"This is sick," said Vaughn's aunt, Marsha Hayes, among other less printable words.

Judge Eric Bergstrom set the tone for the hearing at the beginning, asking for silence and respectful listening. He also said the five family members who would be called to testify should talk about the impact of their loss, but not discuss their views of Bennette.

Judge Bergstrom explained the plea deal, asking Bennette if he understood he would have no appeal option and no chance of earning early release or going to a treatment program. Benette answered, "Yes". 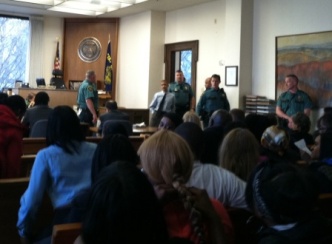 He also told the court that investigators had found no evidence that any other person was involved in the crime, or the concealment of Vaughn's body. In July 2011, Bennette led investigators to Vaughn's remains, buried beneath the nearby hillside on Rocky Butte.

Several family members addressed the court, including Vaughn's aunt, Shawntae Hayes, who said Yashanee was the first child she babysat with her friends.

"I got to watch her take her first steps, and say her first words," she said, stopping to gather herself.  "This was supposed to be a lifelong journey, but she was taken away in the worst way possible. We don't know what took place that night, and it hurts me to imagine the things that did take place.

"Because of your actions we will never see her get promoted from middle school, graduate from high school, go to a prom, or even just the simple things – play with her cousins or her brothers and sisters… We couldn't give her that last kiss on the cheek as we laid her to rest." 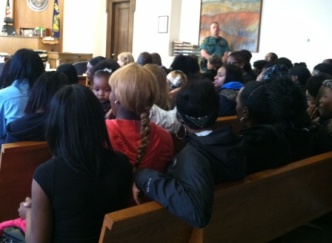 Louis was called to speak, but was unable to talk because she was sobbing so hard. Yashanee's father, Yoshawnee Vaughn, was also in court, brought in by sheriff's deputies, because he is in custody for a probation violation.  An uncle who wanted to speak was told he was too late: the names already had been chosen.

After Davidson's explanation of the prosecution's reason for taking the plea deal, came MacNair's admission that the lawyers were behind the four-month delay in surrendering the location of Vaughn's remains. And the apology.

The judge, lawyers and most reporters left the courtroom. But deputies had to close off the public door and keep the remaining crowd inside because of an altercation in the hallway. The judge and the defense team were seated in the antechamber, looking heavily laden. Other people stood talking in the hallway before making their way downstairs.

Outside the courtroom the family gathered on the street with their friends and supporters. Shock, anger, sadness and disbelief were visible on many faces. A brief shouting match occurred between young men. Then Shaquita Louis spoke to reporters with tears running down her face.

She said she was devastated that the defense team knew where her daughter's body was buried during the four long months that the family was searching for her.

"I didn't even get to tell my daughter I love her," she said, breaking down. 'For them to know where she was and let my baby sit like that….That is not cool. That hurts. "

"Would they want that to happen to their daughters?" she asked.

Louis also said she had no say in the plea deal and would have preferred to go to trial on the murder charges. Bennette will have the chance to see his daughter eventually, but she won't ever see, touch, or speak to her daughter again.

"There are so many unresolved questions," she said.

Bart criticized the investigation, pointing to a list of concerns that the family feels have never been adequately explained. Bart cite a long list of questions including:

Concern that evidence may not have been gathered from Bennette's home in a timely way.

Concern that a witness may not have been interviewed. A woman said she saw Bennette and another man carrying something heavy near Rocky Butte on March 21, two days after Vaughn disappeared.

Concern that others may have been involved in the case. "He didn't have a car," Bart said. "How did he lug her up that hill? There is no way he did that alone."

Concern that voice messages that came to the family were dismissed. The messages claimed that four people were involved and claimed Vaughn was raped before her death.

"It's an injustice," Bart said about the Defense team's decision not to immediately disclose where Vaughn's remains were buried. "I don't know how he can practice in that way."

Investigators told the family they had followed up on all the leads they had, but Bart maintains they did not ask for the voicemail tapes, or interview the woman.

Prosecutor Brian Davidson said in court that detectives had thoroughly investigated the possibility others were involved, but had found no evidence that this was the case.

MORE: Parrish Bennette Before His Arrest
CORRECTION: this article originally gave the wrong number of courtroom.