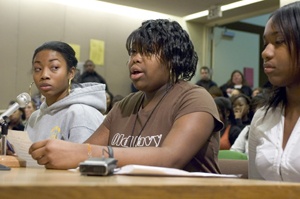 Testimony from the Jefferson High School community will be heard by Portland School Board members next Tuesday, as they consider a proposal to once again – reorganize the school.


The meeting, beginning at 6:30 p.m. in the Jefferson High School cafeteria, is the third of four meetings planned to discuss the proposal. Those wishing to testify should call the school district at 503-916-3741.


A public hearing and vote on the recommendation to divide the school into three academies as well as to create another academy at Harriet Tubman Middle School is planned on Jan. 23.


Nearly a dozen students told Portland school board members Monday night that they objected to the male leadership academy planned at Jefferson and a requirement for uniforms at both Jefferson and Tubman and that many of the recommendations appeared to unfairly single out the Jefferson schools cluster from the rest of the school district. Some suggested that the changes had racial overtones.


"This proposal doesn't leave room for choice. It's not a choice, but a gamble,"said freshman Brittnie Marcell, whose comments prompted a standing ovation by the more than 20 students attending the meeting.


Freshman Justin Clay said the idea of uniforms gave students the message that "African American males can't dress ourselves, that we need someone else to dress us….My mother dressed me for the first 10 years of my life. Now it's time for me to make my own decisions."


The proposal, first developed by a community design team formed nearly a year ago, and then recommended by district Superintendent Vicki Phillips, would created two grade nine-through-12 academies at Jefferson: Arts and Technology Academy and International Baccalaureate and Environmental Studies Academy. A third academy – and the one attracting the most criticism – would be a Young Men's Leadership Academy for grades seven through 12.


Another single-sex academy, the Leadership Academy for Young Women, for grades seven through 12, would be housed at the current Harriet Tubman Middle School. The focus would be on science and technology. No student would be compelled to enroll at Tubman in the seventh grade but it could be an option, Phillips said.


The grade configuration and the requirement for uniform dress would be applied only to Jefferson cluster schools and not to the rest of the district. However, Phillips said, as the changes are phased in and examined, some elements of the proposal may be applied to other district schools.


Just a year ago, Jefferson High divided into two schools: the School of Pride for freshmen and sophomores and the School of Champions for juniors and seniors. Although the programs were designed to give students more personalized attention and to enable collaboration with nearby Portland Community College and Portland State University, the schools have attracted only 655 students from a total student population in the Jefferson area neighborhood of 1,950.
Other district high schools that have not been divided have enrollments more than twice as high, including Cleveland at 1,452; Franklin at 1,418; Wilson at 1,633; and Lincoln at 1,485.


Only 17.6 percent of Jefferson's 10th-graders are meeting or exceeding statewide testing benchmarks in reading and only 13.9 percent in math, according to data supplied by the school district.


The new proposal also would raise the "level of rigor" in all courses, hire more teachers of color, conduct a national search for a school principal, require summer school for struggling incoming freshmen and provide more tutoring for all students. Students also could be required to apply to attend Jefferson's academies.


Phillips said the design team, consisting of parents, community and civic leaders, students and teachers, visited schools "that are beating the odds" in Houston, Texas and New York City before deciding to change the grade configurations and suggest uniforms. The "uniforms" would consist of white or navy shirts or polo shirts tucked into white, navy or gray or khaki pants or skirts.


Students attending the meeting giggled at slides showing examples of students in other schools wearing the uniforms.
Brittnie Marcelle, a straight-A student, said she turned down a scholarship to Oregon Episcopal School to attend Jefferson, but she had questions about the proposal. Would she have to re-apply to attend the school, she asked, and would Jefferson be closed if enrollment declines?


"If under-enrollment is a problem, uniforms are not the solution," Marcelle said.


While some students supported the summer school proposal and recommendations for promoting better access to medical, housing and employment services for students and families, they also said they didn't see anything in the proposed curriculum that they wanted to pursue, such as business and marketing. Others asked when they would know what would be offered next year so they could decide if they wanted to transfer to another school.
Others said they were frustrated with attempts to reorganize Jefferson.


"Why does Jefferson undergo so many changes when there are other schools that have the same problems?" asked one student.


Parents and some members of the Neighborhood Schools Alliance, which formed last year to oppose school closures, also testified. They expressed concern about whether the academic elements of the proposal would be carried out in light of a $50 million budget shortfall the district is facing. Many echoed the same concerns expressed by the students.
"These aren't just Black kids talking about high school," said Steve Linder, a parent. "These are young adults talking about their future."


Jackie Wallace, a parent of five children living in the Jefferson cluster, said she had "no idea" what curriculum would be offered at Jefferson next year.


Although school board members did not discuss the proposal extensively during the meeting, they asked Phillips to come back with answers to questions they had. Most centered on the curriculum to be offered and a timeline for information to give to parents. They also wanted to know the options for middle-school students who didn't want to attend the Tubman academy.


"It's important that it's explicit about what choices parents can make at any of the schools in the cluster," said board co-chairman David Wynde.


Co-chair Bobbie Regan agreed. "Students are saying that what we have there (in the proposal) isn't what they're looking for. The (enrollment) numbers tell us that."