If you've ever passed the Citybikes store in Southeast Portland, you've seen Roger Peet's artwork. The eyecatching mural that covers the storefront showcases Peet's colorful style and his interest in ecology, politics and society. The Portland-based artist and printmaker creates beautiful and intricate drawings of wildlife as well as plants and people.

Now Peet is publishing a collection of amazing photos and prints, from his three-month journey to Lomami Park, in a remote part of the Eastern Congo River basin.  After following the blog of two scientists working in the park, Peet asked if he could volunteer. They accepted. Soon he was on his way to a region ruled by poacher warlords and ivory hunters where rivers are the only roads.

"The park is important because it's one of the most unscathed parts of the world," Peet says.

"It's very remote and it is home to all kinds of diverse species of plants and animals. There is a lot of pressure on the forest, but the park has no logging and no commercial activity –except for hunting and poaching."

Congo's forests remain under threat from poachers and commercial hunters, drawn by the lure of valuable ivory and bush meat. But Congolese fieldworkers are rising to the challenge, trying to ensure this biologically diverse area remains home to some of the world's most fascinating creatures.

The Democratic Republic of Congo has been in the news because of the  violence, rape and looting perpetrated by local warlords, some with the support of neighboring Rwanda.  But Peet says in this remote region, he found warmth, kindness and humanity. In the DRC, community is not just an idea, Peet says, it's a way of life. 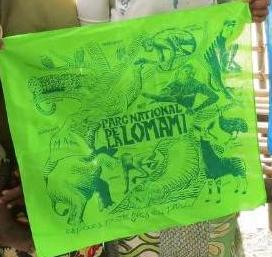 "There is a sense of automatic relationship and togetherness with other people that's very different from here. People who obviously didn't know one another expressed automatic generosity to each other. That way of life exists within great poverty and social breakdown."

Working alongside Congolese scientists to monitor wildlife populations in the park, Peet was able to get a close-up view of a newly-described species of monkey called the Lesula, found only in this remote region.

Peet also helped raise awareness about the value of the new park, through giving away bandanas printed with drawings of the endangered species that live there. Before he left Portland, a community fundraising campaign in Portland helped him raise the money to print more than 400 bandanas.

Congolese environmentalists use the bandanas as visual aids and conversation starters in their work in the remote and isolated villages of the region. Today Peet's bandanas are worn by territorial administrators, researchers, village chiefs, small merchants, fisherpeople, and even a gang of army deserters escaping from the war.

Peet was drawn to the project partly because his father spent time in Congo in the 1960s, flying helicopters for the CIA as a mercenary pilot. But the other reason was his strong interest in wildlife biology. Check out Peet's flickr blog to see dozens of amazing photographs of the Congolese people he met and the wildlife that live in Lomami Park.

Roger Peet is an artist and printmaker whose work critically addresses issues of ecology and society. He is a member of the international political print cooperative Justseeds and president of the board of directors of Portland's Flight 64 cooperative print studio. He lives in Northeast Portland.