U.S. Soldier Who Killed in Afghanistan May Face Death Penalty 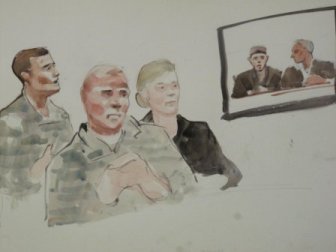 A U.S. soldier accused of killing 16 Afghan villagers in a shooting rampage could face the death penalty if found guilty in a court-martial.

The military has referred the case of Staff Sgt. Robert Bales to a court-martial authorized to consider the death penalty, according to a statement Wednesday.

Another six Afghans were wounded in the spree near a small U.S. base in Afghanistan's Kandahar province last March, the military said.

"The charges are merely accusations and the accused is presumed innocent until proven guilty," the military emphasized in its statement.

"Nothing really justifies killing women and children in a noncombat situation," Bales' attorney, John Henry Browne, has said of the accusations. "But there may be explanations if that's true."

He also said Bales might have been suffering post-traumatic stress disorder.

Bales' wife, Karilyn, has called the accusations "completely out of character of the man I know and admire."

"He committed a mass killing crime, and we would like the court in the United States to implement justice and punish him according to the crime," Ahmad Zia Syamak, a spokesman for Afghan President Hamid Karzai, told CNN last month.