By Helen Silvis of The Skanner News
Published: 13 December 2012

When Oregon Schools Superintendent Rudy Crew was in school, his father asked his teacher what he needed to do to get to college. The teacher told his father that Rudy simply wouldn't be able to keep up. He wasn't smart enough, was the message.

If Crew's father had simply accepted the teacher's biased view, that could have become a self-fulfilling prophecy.  Instead, breaking the unwritten rule for a Black parent in a mostly white school, he said, "Ma'am, Your job is not to tell people who can go to school."

The rest is history. Crew went on to graduate from Babson College and later earned his doctorate in education administration from the University of Massachusetts.

Crew shared that story with educators at the Oregon Leadership Network's Fall Leadership Institute: Putting Equity at the Center of Policy and Practice. The institute brought together more than 300 educators from across the state, to plan how to raise achievement for Oregon students and eliminate disparities based on race, class and first language. 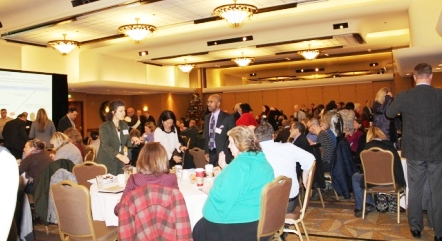 Crew's talk came at the start of a day filled with sessions on how to help children achieve at every level.  He looked the state of education in Oregon, currently. He discussed the graduation rate –not best in the country but not worst –and the achievement gap that leaves Oregon's poor and minority students behind, when it comes to college and career prospects. He also talked about the need to support pre-kindergarten initiatives to help children succeed.


Yet he also said Oregon has the will and the creative talent to raise the bar and to keep on raising it. And he urged educators to be courageous and committed to change.

"This is a systemic problem," he said. "And people we are the system. So we get to change the system."

Education has been set up based on a bell-curve model that says 50 percent of students succeed while 50 percent fail. That doesn't serve students or our society, he said. He also talked about disparities in special education, saying he simply doesn't believe that children of color need to be in special education more than other children.

"We have a system right now that produces Yale to jail outcomes," Crew said. "And that's what that bell curve was designed to do. It's designed to say 50 percent of you are not going to be able to do it and 50 percent of you will. We built a system that essentially puts people in a spin, rinse and wash cycle to figure out who's who. I'm telling you it's a badly flawed and inequitable system." 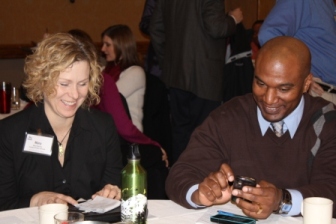 Following Crew, a panel discussion featured education leaders from school districts around the state. Talking about ways to improve education, they touched on everything from building stronger partnerships with community organizations, listening to parents, and building bridges between teachers of different age groups.

For example, Matt Coleman of the Springfield School district, said his district had looked at a group of students from the moment they entered elementary through high school.

"Our class of 2000 had a graduation rate of 62 percent," he said. "Often when that happens we ask what's going wrong in high school. The reality is we need to look at the whole system."

Springfield found that as early as the first 3rd Grade testing, some students were 7 points behind the others. And that gap remained throughout their school careers. So in 9th grade, 30 percent didn't earn six credits. And they spent 20 fewer days in school. Once students fell behind, they began failing and many eventually did not graduate with their group. Elementary and middle school teachers began to see their own role in school dropout, he said. Now everyone is thinking differently.

Sue Ann Higgins of Portland Public schools said the district's strongest critics were parents and advocates from communities of color who, "shared their absolute impatience and frustration with our lack of skill in educating all kids."

Those criticisms are helping drive change in Portland, she said. Higgins also talked about the need to change discipline practices that "engineer kids away from instruction. I can't speak highly enough of how critical that is."