The 22 Minutes that Lasted for Hours

Crime in Oregon was in the national spotlight for the second time this week (The first involved an attempted carjacking by an 11 and a seven-year-old) after a Portland gunman killed three, including himself, and wounded another at Clackamas Town Center on Dec. 11.

While many were tuned into their radios or televisions to get the latest news, the social media universe was often steps ahead in delivering the latest information.

An ongoing discussion has ensued on everything from gun violence to insensitive jokes to media coverage. Even after the Clackamas County Sheriff's Office press conference the next morning, many were still trying to figure out what actually happened.

Yesterday Clackamas County Sheriff Craig Roberts announced the names of the victims and the shooter. Steven Forsyth, 45, of West Linn and Cindy Yuille, 54, of Northeast Portland, were killed in the attack and Kristina Shevchenko, 15, was injured and taken to the OHSU trauma center for treatment.

Sheriff Roberts couldn't specify the number of shots fired but said Jacob Tyler Roberts, 22, was the lone shooter and died from a self-inflicted gunshot wound.

With the mall set to reopen Friday morning and sweeping debates about gun violence and more are playing out across the country, it's interesting to note the entire incident took just 22 minutes.

The media frenzy around the shooting began shortly after the Sheriff's office began receiving multiple 911 calls, starting at 3:29 p.m. According to Sheriff Roberts, the first unit arrived one minute later.

By 3:30 p.m. Facebook statuses and tweets such as "Stay away from the Clackamas Town Center as there is a mad gun man shooting people in Macy's right now!" were beginning to appear.

Minutes later, online news sites began posting their first updates. Some reports were conflicting. The Oregonian newspaper reported at 3:50 p.m. that callers were saying they heard as many as 20 shots.

However, at 3:56, the newspaper said its sports columnist John Canzano, who was reportedly pulling up to the mall as the incident was happening, had said there were 60 shots fired.

The report also noted that it wasn't known whether there was a single gunman or multiple. Around the same time, a series of tweets also stated that "several teens armed with assault rifles were reported at the Clackamas Town Center".

The number of victims was also up for dispute, with media reports claiming four to seven people were injured in addition to the two killed. Others were saying the two killed included the shooter. 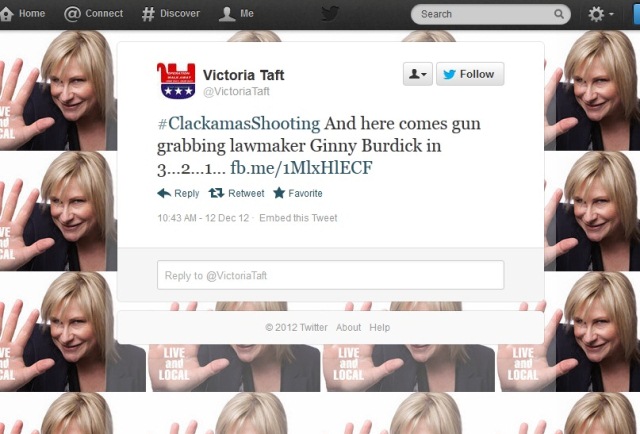 Debates over gun control ensued not long after news of the incident broke. Oregon State Sen. Ginny Burdick tried to gather support for a bill that would ban gun clips containing more than ten rounds of ammunition.

Some people took it a step further and speculated that a concealed weapon holder might've killed the shooter before it was announced that he died of a self-inflicted gunshot wound.

A Facebook user who goes by the name Valley Guns II shared, "Shooting in Portland Oregon Mall! The news is saying the man was neutralized BUT they are not saying he was neutralized by L.E. or by suicide...so, with Oregon being a 'Shall Issue' concealed carry state...who is betting a concealed carry permit holder neutralized the threat? Wouldn't it be great if that is how it played out!"

In the midst of gun control talk, there was also a trend of two very different emotional reactions: Many people sent out thoughts and prayers to the families of the victims. Others took to making humor of the situation.

In particular, some joked about using the shooting as an opportunity to steal.

One Clackamas High School student posted, "did you guys hear about the mall…. i herd barnes & noble has a sale!!!" This person also tweeted, "nice accuracy noob. 60 shots 2 kills… you would last 1 game in call of duty with me #2.5KD".

Another person tweeted, "If I was at Clackamas yesterday, I woulda hit a FAT LICK during the shooting #NiggerMentality".

Many voiced their displeasure with the jokes. The former became the subject of a prolonged Twitter dispute.

The speed with which the national media picked up the story and some statements from Sheriff Roberts prompted an array of conspiracy theories about whether all the facts of the incident have been released (Read how Slate Magazine took to debunking some of the theories here).

Others questioned the Sheriff's continued use of the word "neutralized" in regards to the shooter and why it took so long to confirm his death even though it allegedly occurred 22 minutes after the first 911 call. Many, in fact, found it strange that police were able to respond within a minute of that call.

One tweet read, "Shooting at Clackamas Town Center, SWAT sped past my house earlier damn that was fast".

#Clackamasshooting was still trending well into Wednesday morning and as of this writing, the conversation is still pervasive throughout social media networks. Many social media users have taken advantage of the outlets to provide info on support services and counseling, as well as police resources.

Those that knew Jacob Roberts have come out to say the man who terrorized Clackamas Town Center wasn't the Jacob they knew. 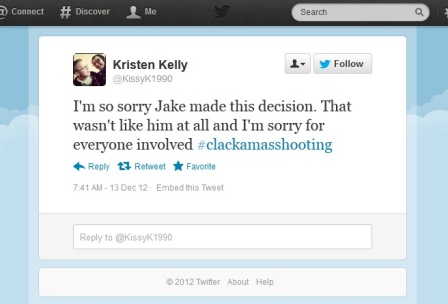 As more details roll out, expect social media to be the go-to source for the latest news and analysis of this tragedy.