By Helen Silvis of The Skanner News
Published: 07 December 2012 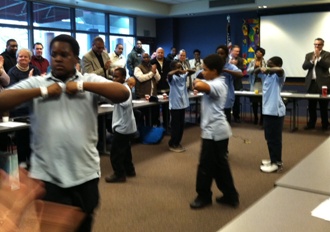 Portland's gang task force meeting drew a larger crowd than usual, to say goodbye to Mayor Sam Adams, who co-chaired his final meeting as mayor. About 50 people crowded into the meeting room at the Northeast Police precinct to view a short video about Adams work and thank him personally for his leadership.

'It's been a really great experience for me to partner with you on something I really care about - our youth," Smith said.

Speakers thanked Adams on his work to prevent youth violence and reduce the number of illegal guns in circulation. Under Adams leadership barriers between agencies and the public have come down, and community members have been included in efforts to support at-risk youth.

"Thank you for staying the course and continuing to believe in us," Blake said. "You have made street level outreach a vital part of the public safety committee."

Keith Dempsey Ph.D., clinical professor of counseling at George Fox University, brought a group of boys from Rosa Parks Elementary School to entertain the group with an acapella rhythm routine. Dempsey said the boys were our future leaders and we will hear more from them.

The meeting also included updates from police. A group of young boys, aged 13-14, have been shooting at one another in McCoy park.  But thanks to a mother who called police to report a gun in her son's possession, the gang enforcement team was able to seize six guns, which had been obtained by minors.

Gang enforcement officer Russ Corno said an investigation into the July 7 shooting  in Peninsula Park, has led to a second arrest. Teondre Bonner, 20, was arrested on Aug. 2, and last week Malik Overton, a 16-year-old Jefferson High school student, was arrested at the school. A loaded pistol was found in his possession.

Joe McFerrin, president of POIC, said the issue was intensely personal for some around the table. The boy arrested at Jefferson was his first-cousin's son, he said. McFerrin thanked Mayor Adams for his leadership.

"When I think about the things you have done in your role, you exemplify leadership."

Adams joked about the bad haircuts, he saw in the video. But he also struck a solemn note. He said the  most difficult experience he'd had as mayor was on June 26, 2011 at 2 a.m. on 82nd Avenue. Adams was there after police responded to the shooting of Leonard Irving, who had been attending his nephew's birthday party at Seeznin's bar and grill. Irving's mother arrived while her son's body still lay on the street.

"She came up to me and begged to go through the police line to be with her son," he said.

Although Adams couldn't interfere with the police investigation, the community rallied around to support the grieving family, he said.

"She was so grateful for the way police, Marci Jackson, Antoinette Edwards and other people in this community reached out to her and her family," he said.

"By the numbers, we have not had success – yet. But with the continuing commitment and the partnerships we have, we will get there."