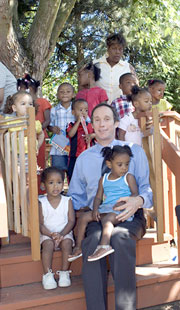 Portland City Commissioners yesterday unanimously approved referring the Children's Levy to the May 21, 2013, ballot to give voters the chance to approve its possible five-year extension.

The levy was first approved by voters 10 years ago under the leadership of Commissioner Dan Saltzman and County Chair Jeff Cogen, then was renewed by voters four years ago.

So far the money has been used to provide grants to area nonprofits and service providers that focus on children's issues including: early childhood education, health and school-readiness; afterschool programs keeping kids safe and improving their academic achievement; child abuse prevention; and services to youth in foster care.

Now, advocates say they want to shift their focus to include food security.

"Hunger has devastating effects on a child," Saltzman said the day before the vote. "No child in Portland should be worried about where their next meal is coming from. Studies show hunger stunts healthy growth and makes children susceptible to illness.

"We can and will help this vulnerable population, with the support of Portland voters."

Nearly a dozen supporters from area nonprofits testified Wednesday in favor of the council's referral of the levy to the ballot, and each city commissioner spoke in glowing terms about the program. There were no objections or critiques at the council session.

The levy provides about $10 million per year to fund children's programs in the city, says Portland Children's Levy spokeswoman Mary Gay Broderick, reaching some 16,000 of the neediest children.

"The new Levy will expand upon the good work we are doing and create a specific program category to target funding for programs to prevent childhood hunger," she said.

"We only invest in proven programs and operate with a 5 percent administrative cap so that 95 cents of every dollar goes into children's programs throughout the city," she said. "Over the past 10 years we also have leveraged $6 million in private dollars to maximize resources for Portland children."

"Children in our programs must overcome innumerable odds, such as poverty, abuse and neglect, homelessness and substance abuse," Broderick says. "They come from households speaking any one of 59 different languages, with more than half qualifying for free/reduced lunch at school.

"We know that hunger is an issue for children and families being served by the organizations we support.

"The sluggish economy has made it worse. In Portland, children make up about 19 percent of the population but about 34 percent of those eating emergency food from the Oregon Food Bank Network," Broderick said.

"Portlanders said yes to the Levy in 2002 and overwhelmingly in 2008 by a 72 percent margin," Broderick says. "They recognized our solid track record of investing in proven programs, of not creating a new bureaucracy, of obtaining annual audits, of maintaining a 5 percent admin rate, and made the connections between strong, healthy children becoming future leaders in a strong, healthy city."

Find out more about the Portland Children's Levy at http://www.portlandchildrenslevy.org/