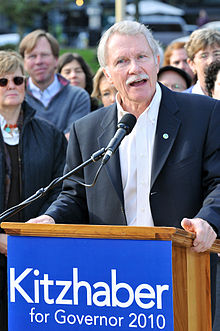 This just in from the Governor's Office:

Governor Kitzhaber today announced that Oregon is a recipient of the federal "Race to the Top – Early Learning Challenge" grant. The state will receive $20 million over four years to strengthen the state's early childhood system and ensure that Oregon children reach school ready to succeed.

The grant was announced by the U.S Department of Education and the U.S Department of Health and Human Services, which jointly issue the grants. State recipients are chosen based on their ability to implement coherent, compelling, and comprehensive early learning education reform that results in high-quality early learning programs for young children. This funding is designed to spur broad system improvement – not to pay for direct services to young children. A total of $500 million will be awarded through the Race to the Top – Early Learning Challenge.

"This is a welcome endorsement of Oregon's focus on improving early learning and school readiness," said Governor Kitzhaber. "Success in school starts long before school. This federal investment in our efforts will help to improve results for children and families and contributes to our efforts to transform Oregon education at all levels."

Jada Rupley, Early Learning System Director, praised the announcement. "Oregon has charted a clear direction and taken many important steps in the past two years to improve early learning. Winning Race To The Top will help us to move further, faster, to improve opportunities and results for kids."

Oregon's application was based on the Governor's initiatives to create a more coordinated approach to budgeting and school curricula across the education spectrum. The federal money will support improvement in the quality of early learning and development programs, better training of early childhood educators, and better measurement of how well programs prepare children for kindergarten. This is Oregon's first successful Race to the Top application at any level of education.

The statewide Early Learning Council, established in July 2011 by the Oregon Legislature, is the lead agency in charge of implementing the grant. The Early Learning Council is housed in the Governor's Office and is a part of the Oregon Education Investment Board, which oversees the creation of a unified system for investing in and delivering public education from early childhood through high school and college.

Thirty-five states, the District of Columbia and Puerto Rico submitted applications to compete for the first round of the federal early learning grant, which was first announced in 2011. Oregon finished 13th (since revised to 12th) in that first round; only the top nine were funded. Based on the strength of Oregon's application, the state was invited with four others to apply for a second round of Race to the Top in April, 2012. That second round application is the subject of today's announcement.