By Helen Silvis of The Skanner News
Published: 04 December 2012 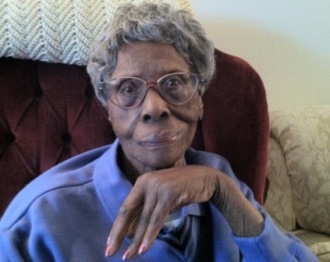 Thressia Del Colbert, who helped her family and friends survive the Great Depression and the Vanport Flood, passed away Dec. 3 at the age of 101.

"She was a pioneer for all black families that moved from the south to Portland," he said. "She is the reason we are all here! When the Vanport flood hit, she was there helping people find comfort and safety. She was always a frontline soldier. She was the Grandmother that I never had on my father's side, and was a mother to the whole community. She worked like a man out in the field to make a better way for her family."

Born on Nov. 28, 1911, in Linden Texas, Colbert came to Portland in 1942.  She worked cleaning ships in Gunderson's shipyard, and raised two daughters: Fay, who preceded her in death; and Margaret, who became a Washington County Sheriff. She also helped raise many other Portland children, taking them to the fields every summer to work and make money.

Last Dec. 3, Colbert's family held a huge party to celebrate her centenary. Relatives arrived from California, Texas and elsewhere to share their stories. Many of them said their own success could be attributed to the values they had learned from the remarkable woman, known to all as, "Aunt Stell".
Read her full life story