Mack and Dub: We Will Re-Open 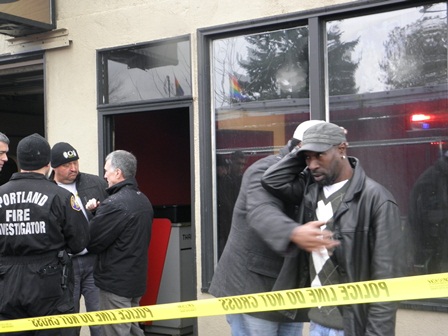 James McClendon and William Travis, known to many as Mack and Dub, have been building their cooking reputation for years. Despite a fire that severely damaged Mack & Dub's Excellent Chicken and Waffles last Wednesday, they vow to push on and re-open.

"We're committed to our business, our brand and our community," says Travis.

Last week's fire is being investigated by the Portland Police Bureau (PPB) as an arson, burglary and possible hate crime.

McClendon says the owners will be meeting with adjusters later this week.

During an interview with The Skanner News last week, Simpson couldn't specify what the graffiti said.

McClendon won't specify either because he doesn't want to empower the perpetrators.

"We didn't really want to put it out there because we, as Black people, have already been subject to so much throughout the test of time," he says. "I think people already felt bad enough knowing something was put out there and we don't want to give the haters their props. We're not going to advertise what you put on our wall for you. To me, that's what they wanted."

Last week, Simpson said there was uncertainty among investigators whether the graffiti was fresh or had been up before the incident and simply hadn't been cleaned. McClendon and Travis confirmed that the derogatory graffiti wasn't up the day before the fire.

Earlier this year, racist graffiti on the Sons of Haiti Masonic Lodge came under question when Portland State University professor Randy Blazak pointed out that the swastikas were backwards in an interview with The Skanner News.

Mack & Dub's opened up on Feb. 1. The owners say the date was purposeful because it's the first day of Black History Month.

"It's a good anniversary every year," says Travis.

Both men grew up cooking and have been in the music industry for years. McClendon was a member of the U-Krew, which was recently inducted into the Oregon Music Hall of Fame. Travis, a product of the Jefferson High music program, has been producing since 2000. He founded Trillion Cuts Studios in 2004.

The two have focused on making food and music to fill a void they saw missing in Portland.

"Feed them and let them dance the night away," says McClendon. "We wanted to provide the town with good music, good food and atmospheres that you don't see that often. Being blessed to travel a lot, I saw a lot of different restaurants in different cities and I said Portland needs something like this. The town would really appreciate this."

He remembers they use to make grilled chicken and rice bowls at a venue known as "The Mansion" back in 2008. They would also play their music for patrons and the spot became a prime place to socialize.

Chicken and waffles came into the picture two and half years ago when the two joined with AJ's on the Rails. Their cooking received positive reviews and they began a catering business after the restaurant closed.

When the catering business picked up and they needed a bigger kitchen, McClendon and Travis connected with the owner of Varsity Blue Barbecue. After collaborating on repair work and remodeling, they ended up parting ways. McClendon and Travis acquired the property and decided to turn it into a themed restaurant.

They went with chicken and waffles because there were no such restaurants in Portland.

Both men say the response was encouraging. Mack & Dub's has gotten write-ups in the Oregonian and Willamette Week, as well as a feature on BlackAtlas.com.  They also credit a promotion with Groupon for helping widen their demographics.

Travis says they have regular customers come in from places like Wilsonville all the way to Medford. Some have even made the trip from British Columbia and Seattle.

"We like to ask people when they come through the door, 'How far did you come from?'" says Travis. "Some people are like, 'We came down here all the way from Seattle.'"

To some, Mack & Dub's has become the unofficial "Black gathering spot" in the wake of Reflections Coffee and Books closing earlier this year.

The owners say that, while they didn't see themselves in the lens of one of the last Black businesses standing (mainly because they just started), they do recognize the importance of having a diverse businesses in the North and Northeast Portland community.

"I grew up right on the corner of Fremont and MLK and he grew up in the same neighborhood so to have something in the neighborhood that we grew up with really meant a lot to us," says McClendon.

They've hosted popular poetry nights and catered for groups like the Chrysler 300 Automobile Club, which gave them the opportunity to provide a venue for Black businesses.

Travis and McClendon say they've received an outpouring of support since the fire, which has helped them through the stress.

"We're very grateful for all the love and support people have given us since we opened and even after this fire," says McClendon. "People have been calling, emailing and offering to help us any way they can. We want people to know we appreciate that and we're going to be back in business as soon as they give us the go ahead."

For more information on a planned fundraiser and the restaurant's re-opening, you can go to Mack & Dub's official website and their Facebook page.