Dana Thompson Stars As Lt. Uhura in Trek in the Park 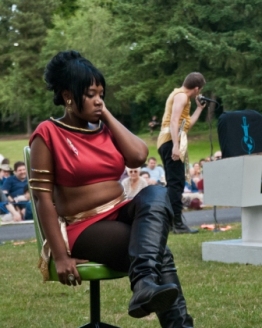 Tell us about the Atomic Arts and the Star Trek series.

We do theatrical interpretations of classic episodes of Star Trek from the 1960s. This is our fourth year and each year we do a different episode. So this year we did Journey to Babel. In previous years we have done Mirror Mirror—that was in 2011— Space Seed in 2010 –that's the episode that introduces Khan and the first year we did Amok Time.

Were you a fan of the show?

Yes very much so. My mother and I used to watch it together when the show was in syndication in the early 80s. That was always a bonding experience so I have very, very fond memories of watching the show.

Has your mother seen you perform as Lt. Uhura?

Yes, my mother saw me last year in the production of Mirror Mirror. I asked her to come to Portland then and she saw it in Woodlawn Park. That's where we did the show last year and in previous years. This year we did it in Cathedral Park under the St. John's Bridge.

So this is mostly an outdoor event?

Trek in the Park is a great summertime event that we put on for Portland every year. It's outside in the fresh air always in a very good spacious space where people can bring their children, or their dogs and picnic. Now in our fourth year, we've become a Portland staple at this point.

Did you ever imagine you would get to play the iconic part of Lt. Uhura?

Not in a million years. At the first audition, when I sat down with Adam Rosko, Art Director of Atomic Arts Productions – who plays Capt. James T. Kirk—I had no idea that that was what the part was going to be.  So when he said it was going to be the part of Lt. Uhura from the original series, my heart just flipped over. All these memories of me and my mom watching the show together just flooded back.

I remember talking to my uncle about getting the part and he just told me that when the show came out he was in his late teens and he remembered it very fondly. He had a huge crush on Lt. Uhura.  Of course, she was such a beautiful woman. Nichelle Nichols, to this day is such a classy woman. When she was on that show she was in her early 20s, and she became a sex symbol, a role model almost

And she became a symbol of the civil rights movement during the 1960s. Before that time, Black women were not depicted in any roles other than servants.  So she was the very first woman really, who was portrayed as an equal.

At the same time her role was not very developed. She was the communications officer, so her primary duty was just to relay information to and from the ship. 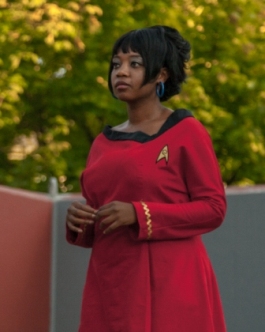 Yes, that's a story she tells from time to time. After her first year she went to see Gene Rodenberry the writer of the show to say she was kind of ready to move on. She had started out as a Broadway actress and singer, and she wanted to go back to that. So she kind of put her notice in to Gene Rodenberry, and even though he didn't accept it, he held on to it. She had been invited to an NAACP event and when she was there she was told a big fan of hers wanted to meet her. So she turns around and her big fan turns out to be the Rev. Dr. Martin Luther King Jr. She told him she was thinking of leaving the show and he pretty much emphasized to her how important it was that she still be seen on TV. That it was important for young men and women of color to see a woman of her stature on this show – regardless of whether it was a space show, or whatever you want to call it. Her presence on the show had such a big impact during the late 60s that he told her, you cannot leave this show, you have a big responsibility.

So she went back to tell Gene Rodenberry she wasn't going to leave the show. Not only was she the first woman of color on TV who was not a servant or a slave, she became a symbol for the civil rights movement.

How about you? Are you from Portland?

Not originally. I'm from Kansas City Mo. born and raised. I moved to Portland 11 years ago. I was 23. I had gotten my degree in English Literature and was just starting out on my own, trying to figure out the world. I began working at an internship a book publisher, which only lasted a couple of months. But from there I just got really settled in Portland. I really, really enjoyed the environment, the people, and all the activities happening in the city at that time. I just felt I had found my place.

What happened after the internship?

It was very difficult. Looking back I wonder how I survived the first six months after that internship without having a steady job. I pretty much managed with the help of a lot of friends and new acquaintances. I worked my way through it until I got a job in a call center. At that point I got a bit of relief. After that I did everything I could to survive. I worked as an administrative assistant, call center rep, whatever it took to make a living for myself.

When did you start acting?

Before I moved to Portland I did do some acting in comedy, when I was in college. My dear, dear friend who has just passed away Clayton Fraser: he started a comedy group on campus called "The Short Bus Kids," and he asked me to be part of it.

At that time I had no inclination to become a performer, but he was a funny, funny man. And he thought I was funny. We started out doing shows on campus, and we got a lot of attention. For over a year we entertained the campus, groups of kids and shows. Our biggest show was for the Human Rights Foundation in Jefferson City. It was a wonderful time and I think that's where I caught the bug for performing.

How has your career progressed?

About 5-6 years ago I was asked to be part of an activist production for a friend. I signed up with a talent agency and ended up getting sent out on modeling gigs. And I would do auditions, readings, anything to get myself out there as a working actress.

I've been helping out a lot of friends who are doing student films. I recently took part in a film called the 'Goldfish of Doom' produced by Peril Press and directed by Jared Prophet. It was included in the Grand Guignol 72-Hour Horror Film Festival, which happens every year with a Halloween theme.

I've also taken part in some music video, for local artists. I took part in a music video for Rustlah, who is a local hip hop artist. The video was called "Fearless Leaders."  I met Rustlah through a friend who is also a videographer and film director. That's Jason America. He has a great vision and I've taken part in a few of his films too.

Tell us about your band?

My band's name is Dartgun and the Vignettes, I'm a vignette. It's hard to characterize our music because we have so many influences. I usually say we're punk rock doowop. We have the full band with Dartgun and the Vignettes are a trio of girls. We provide harmony and melody, kind of in a doo wop kind of fashion. We're like The B-52's meets The Cramps.

Which Portland bands do you listen to?

A lot of local bands I listen to are bands Dartgun has shared bills with. The awesome punk rock band 48 Thrills, whose guitarist, Mike, is sharing his skills as a record producer and engineer and is helping Dartgun and The Vignettes record an album right now that we hope to have done and released by the end of the year 2012. I love the sounds of Thundering Asteroids, Bitch School, Melody Beirwagon, The Anxieties, Stumblebum, Muddy River Nightmare Band, Glitch Armada, The Decliners. All of these bands are AMAZING, very kind people, really talented, and make up an awesome local music scene in Portland right now.

Are you going to stay in Portland?

I hope so. I'd live to stay in Portland.

Trek in the Park

When: Sun., Dec. 2 at 1 p.m. and 7 p.m.
Price: $6
Atomic Arts presents a one day extravaganza of all things Trek, including one-time only performances of Star Trek scenes the troupe won't perform anywhere else before Trek in the Park wraps up its five-year run next summer. Includes live music by Peter Dean and the Boys, a performance from the PDX Broadsides, a screening of Atomic Arts' performance of Journey to Babel at Cathedral Park, and a screening of Star Trek IV: The Voyage Home, hosted by Cort Webber and Bobby Roberts of the cortandfatboy podcast.