The Unequal States of America? How Growing Income Inequality Hurts Everyone

By Helen Silvis of The Skanner News
Published: 15 November 2012

When the economy grows, incomes rise and everyone benefits. During the 1950s that's exactly how it worked. But for the last 30 years, the top 20 percent of Americans have benefited far more from growth than middle-income or lower-income households.

The result?  Income inequality has risen steeply across the country.

That's the conclusion in a joint report released Wednesday by Washington DC-based think tanks, the Economic Policy Institute and the Center on Budget and Policy Priorities.

"Gains from growth have gone mainly to the top leaving the middle and the bottom earners at the side of the road," says Doug Hall, director of economic analysis and research at EPI. "That's clearly not a recipe for shared prosperity."

Over the last decade, households in the bottom 20 percent income bracket have seen their incomes fall by 5.8 percent, even as incomes have risen 8.6 percent for the richest 20 percent, the report says.  For the top 5 percent those gains are even higher at 13.9 percent.

The report, called "Pulling Apart," looks at the national picture and also breaks down the numbers, state by state. Nationally, over 30 years, it's not just low-income households that have lost ground. Middle-class households too have fallen behind.
To read the full report click here (pdf download 2200K)
And because the report does not include income from capital gains, which benefits the richer groups far more than the poorest, it actually underestimates income inequality. For example, a separate analysis by the Oregon Center for Public Policy, found that in 2010, the top 1 percent of Oregon families collected about 70 percent of all capital gains income in the state.

But Oregon is ranked 7th among the states for the fastest growing gap between top- and middle-income households.

"Oregon's economic story of the past three decades is one of surging income inequality," said Jason Gettel, policy analyst with the Oregon Center for Public Policy. "The destabilizing and debilitating effect that income inequality has on our economy should be a chief concern among Oregon policymakers."

What caused the increase in income inequality?
The researchers say the reasons include:
Growing wage inequality with wage stagnation for workers at the lower end of the wage scale
Globalization and the outsourcing of manufacturing and other skilled jobs
Unemployment spikes
Fewer workers in unions; unions tend to bolster wages
Government policies that have eroded the safety net, while reducing taxes for the wealthy
A federal minimum wage that is not inflation adjusted.
Expanded investment income that benefits largely wealthy households

Why Does it Matter?
But  does inequality matter? After all, the American Dream does include the idea of working hard and getting rich. Liz McNichol, a senior fellow on state economic policy with the Center on Budget and Policy Priorities, and a co-author of the report, says  rising inequality brings a host negative effects. One problem is a reduction in social mobility, she says.  Another is lack of a skilled workforce.

"Income inequality makes it hard to create the workforce that we need for the future," she said. "Lower income kids tend to struggle in school. That's a problem for them, but it's also a problem for all of us."

"Race is an important factor in determining which individuals move up the income ladder and how far; studies show that the upward mobility of black families is half that of white families.  Moreover, in a major national study, almost half (45 percent) of black children whose parents were solidly middle class ended up falling to the bottom of the income distribution, compared to only 16 percent of white children."

Another problem is segregation, McNichol said, as the rich increasingly wall themselves off from the rest of America, and the poor congregate in low-rent neighborhoods.  When the wealthier groups have no stake in public education, and rarely come into contact with poor children and families, we lose the political will to improve public education.  Children born into poor families are denied a crucial ladder into higher income brackets. 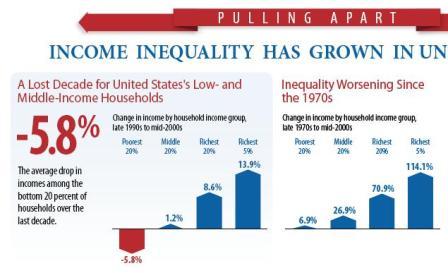 Too Much Inequality Leads to Disillusion and Anger

Other harms include the destructive impact of large numbers of people being denied adequate healthcare, food, housing and education. Crime, mental illness and other social ills rise when wages are too low to support families. And when hard work simply doesn't pay off, people lose trust in society, our government and our institutions.

"It's discouraging for those who are not at the top," McNichol said. "People feel that this is not the American Way, that it's not fair, and that it is going to have an effect on the American economy going forward."

Enter the Occupy Movement, with its focus on the enormous advantages of the wealthiest 1 percent. Occupy activists highlighted people's anger and disillusion over financial issues, such as:  unemployment, foreclosures, gentrification and student debt.

And a Pew Research Center study released in January, found that, "about two-thirds of the public (66 percent) believes there are "very strong" or "strong" conflicts between the rich and the poor—an increase of 19 percentage points since 2009."

The federal government could change this trend toward greater inequality with policy changes that redistribute resources, the report says. Congress could remove tax breaks for the wealthiest groups, strengthen unemployment insurance and the safety net, and remove barriers to union representation.

But states also have a big role to play in reducing income inequality. For some states, that could mean avoiding increases to sales taxes, and instead reducing tax breaks for the wealthy. For most states it should include raising the state minimum wage and strengthening supports for working families, such as childcare assistance and unemployment insurance.

"States that adopt policies that reduce income inequality can help their states recover more quickly from the downturn," McNichol says. "And it will position them to help their economy grow for the future."

Gettel says the Oregon Legislature should renew the Earned Income Tax Credit, which will expire in 2013. The tax credit helps around 250,000 low-income working families in Oregon — mostly families with children.

And lawmakers should reject calls to cut Oregon's capital gains tax, he said.

"The first rule that Oregon lawmakers should follow is, 'do no harm,'" he said. "That means, above all, no new tax cuts for the rich because they would only exacerbate the problem."